The fanfare of publicity surrounding the announcement that the UK had experienced - hold your breath! - 0.1% of growth during the last three months of 2009 was embarrassingly inappropriate in several ways. First, and most obvious, was the awkwardness of statisticians behaving like media tarts. The explanation can only be their fear of facing the Osborne axe if the Tories get elected.

Second was the celebration over such a paltry increase - and in the quarter when all economists and statisticians know that the bulk of retail activity takes place every year. This time the Christmas effect will have been exaggerated because of what used to be January sales taking place before Christmas. The data are seasonally adjusted to attempt to eliminate these effects, but given the unpredictability of both business and consumers in these extremely unusual times, 0.1% growth is really no news at all. The dismal 'growth' trend in the figure from ONS illustrates this.

The most intelligent commentators extrapolated from this 0.1% to tell us how much smaller our economy is now than it would have been if we had followed 'a normal growth path': around 6%. I wonder how many people will think about that and realise what it teaches us about the rapid nature of expansion when we are following 'the normal growth path'. Growth on growth, exponentially in this manner, is what is driving us to the planetary abyss. As the authors of Limits to Growth identified, humans have a problem grasping the abstract reality of exponential growth. To help explain they included this story in their report:

'French children are told a story in which they imagine having a pond with water lily leaves floating on the surface. The lily population doubles in size every day and if left unchecked will smother the pond in 30 days, killing all the other living things in the water. Day after day the plant seems small and so it is decided to leave it to grow until it half-covers the pond, before cutting it back. They are then asked, on what day that will occur. This is revealed to be the 29th day, and then there will be just one day to save the pond.' 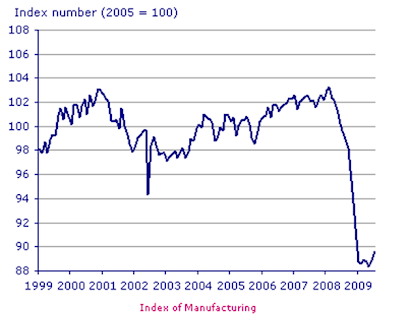 So we can learn lessons about the weakness of statistics and the crisis of economic growth, but I think I have detected a more encouraging sign: that people are not behaving like rational economic men. The statistics on which economic planning is based are monetary figures, so they include all the pointless shuffling around of money that a financial economy indulges in. If you are interesting in the real economy of stuff, then the second figure is more illuminating: manufacturing industry in the UK has fallen off a cliff.

And yet unemployment has not risen anything like as rapidly as predicted. In economic theory, a recession results in firms automatically reducing output and cutting prices and wages. They do this in a competitive process and without regard to the human costs. Yet in this recession we have seen firms negotiating with workers to share the available work and the income that is available to be paid out in wages.

Is this merely an adaptation of capitalism, where we willingly cut our own wages? I would prefer to interpret it as humanity rather than flexibility in the workplace. Since the steady-state economy implies a level of economic activity considerably lower than that which prevailed before the recession, this bargaining over the value of production is something that should be facilitated and extended. Tweet
Posted by Molly at 08:07