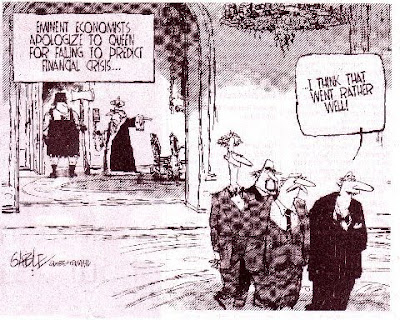 Regular readers of this blog will know that a recurring whinge relates to the strict orthodoxy of economics - as taught in universities and advised to governments - and the hegemony which it exercises across the globe in these early years of the 21st century. But first the Queen questions what economists are up to, and now from the pink pages of orthodoxy themselves, comes evidence of the paradigm beginning to crack. When FT journalists bewail the lack of uniformity amongst orthodox economists then times are becoming interesting indeed.

Krugman's questioning of free trade - a concept that traditionally stands alongside economic growth as one of the twin pillars supporting the edifice of the neoclassical catechism - is clear proof that the economists are ruffled. While capitalism is endowed with what my Marxist-Lentilist friend refers to as a Protean ability to adapt, the process is not a painless one. And while it is taking place is the moment of the system's greatest weakness.

Alongside Krugman the article cites Robert Barro, whose work on growth convergence argues that countries and regions within those countries will naturally tend towards similar rates of growth in the medium term. Evidence has failed to support this theory, but that has not held back the eminent economist's career. He is now accusing those economists who support major public spending to prevent a Depression of turning to magic. Once this criticism comes out of the armoury, no economist will be safe. From white-coated scientists to snake-oil witch-doctors, they will lose their sacred status at a stroke. Or am I just attempting to dream new year hopes into reality?

Clive Crook, for that, dear readers, is his name, is most upset by the fact that the politics that has always lain behind the neoclassical hegemony is being revealed as the profession comes under pressure for having allowed massive financial and environmental crises to occur. The consequent cracks allow space for the barbarians to rush in to challenge the citadel. Tweet
Posted by Molly at 09:38