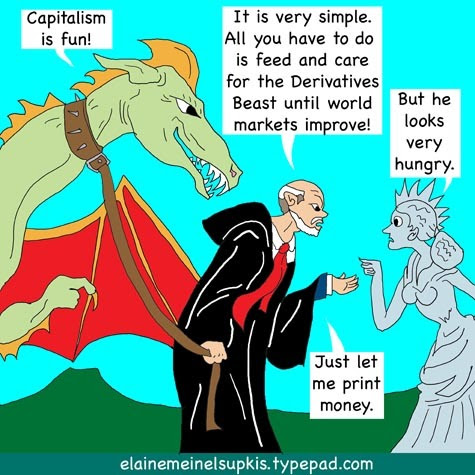 I've been wondering for a decade or so what the government actually means by 'the knowledge economy' and the more I think about it the more it reminds me of Baudrillard's simulacrum: the reason we have to be told so much that we live in a knowledge economy the less most of us know.

The credit crunch illustrated this superbly. We had offices full of people at the FSA producing massive reports about the soundness of a range of financial institutions but, as the horror show unravelled, it became obvious that they did not understand what those organisations were doing. The words had no relationship to the activities; the 'knowledge' was utterly disembbed and functionally useless.

How do you prove your worth in a knowledge economy? Clearly by producing more words than anybody else, hence the explanation for the rooms full of people at conferences and conventions who are just advertising piles of reports. Who has time to read all these words? Even if we could read a small proportion they would have no practical use because 'It ain't what you know it's the way that you know it'. If your knowledge is not embedded so that you can use it to forge a relationship between yourself and something of importance to you, especially something physical and real, then it will always reamin virtual knowledge.

This is why I find my knowledge of basket-making the most valuable knowledge I possess. It is also why I have particularly enjoyed reading The Spell of the Sensuous by David Abram. For those who are not already familiar with this book, it explores the history of our dislocation from our planet, which Abram suggests was accelerated by our shift from a society that relied on story-telling to one whose history was literate.

Our knowledge has no resilience. If we fear for the security of our supply chains for food and energy, how much more should we be nervous about our knowledge. Not only is it floating free of any relationship with the real world, it is also stored on highly transient media. Without a computer most of it is not even available. The media we use to store data are so fragile that, within 20 years, we will have more photos of our great-grandparents than of our own children that we have taken in the past year.

Lest you fear that I have at last taken leave of the modern world, I will end this post with a recommendation for an excellent piece of knowledge-based writing that I would never have been able to find without the internet. Nicholas Hildyard's A (Crumbling) Wall of Money might as well have been called 'Derivatives for Dummies'. I would suggest you read in small chunks, for the same of your blood pressure. Tweet
Posted by Molly at 13:24