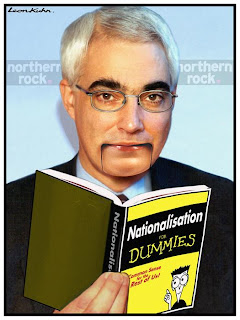 There is considerable discussion in green circles these days about whether we should support the nationalisation of the banks. We need to be clear about what this means. First, we need to distinguish between ownership and control. At present, the government is taking on ownership of the banks but, because of its ideological revulsion from any sort of economic management, it is not controlling them.

This is an irresponsible and dangerous policy. Brown and Darling appear to have naively believed that, once substantially publicly owned, banks would automatically start acting in the public interest, abandoning a lifetime of self-interested profiteering. They still appear reluctant to appoint citizen directors, or other public-minded experts, to the banks' boards. A green proposal for control of the banks would surely also include their breaking into smaller, regional and local banks with requirements to serve businesses in their local communities with lending facilities.

The more serious question is whether we can afford to support the banks. Where is the money coming from to balance the bad assets of the bankrupt banks? Initially, we were borrowing it from our children. Now we are creating it in return for our financial credibility in the world - hence the precipitate decline in the pound. The end of this road comes when private-sector investors refuse to accept government 'paper', effectively ceasing to believe that the assets and workers of UK plc can make good on the IOUs.

It appears that we are reaching that situation. The value of long-term gilts (money borrowed from investors now that we promise to pay in 30 years' time) is falling. The quantitative easing we have heard so much about is being used only as a bootstrap technique to conceal this unpopularity of government debt. So the Bank of England is providing itself from nowhere with the ability to buy our own national debt.

No country can absorb the sorts of debts that have been produced by reckless bank lending. The policy of quantatitive easing to finance the unfinanceable lacks all credibility and begins to suggest a situation where, by taking on bankrupt businesses, we may be moving towards banktupting our own nation. Tweet
Posted by Molly at 07:55