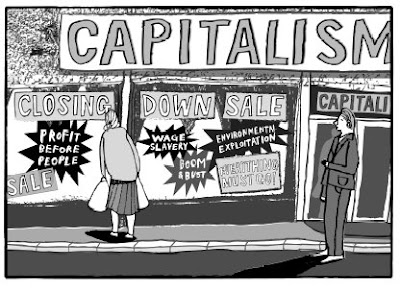 I'm launching my book this afternoon at Ruskin College in Oxford. The commissioning editor has written a few words for the launch and it reminds me of how much the world has moved on in the 18 months or so since I started writing. He recollects the supreme self-confidence of global capitalism in 2006/7, its claims to be not only the greatest economic system in the history of mankind but the only possible way of organising economic affairs: as unchanging as the laws of physics.

How paltry those claims seem now. Green economists were always aware that the economy was failing in two fundamental respects: it generated huge inequalities which led to deaths and suffering in the poorer countries and the poorer parts of our own country; and its expansionst logic threatened the health of the planet. Now it is failing in its own terms as well.

Unlike the vultures who circulated around Woolworths and other familiar friends on the High Street who are now defunct, few will bemoan the special offer deals that should die with the death of capitalism. As this excellent cartoon by Imogen Shaw shows, we have far more to gain than to lose from the new paradigm we will build together. Tweet
Posted by Molly at 12:05