You are what you make, not what you buy

A famous critique of the nature of work within a market system is to be found in the writings of Karl Marx. One of his central concerns was the social and psychological effect on the individual of life within the market. As expressed by Terry Eagleton, Marx’s view was that ‘Under market conditions, individuals confront each other as abstract, interchangeable entities; working people become commodities, selling their labour power to the highest bidder; and the capitalist does not care what he produces as long as he makes a profit.’ So there is nothing original in the critique of the anti-globalisation protestors, although they may not recognise the source of their complaint.

Marx reserved a special place for work in his analysis: he considered it to be the central expression of what he referred to as our ‘species-being’. It is because what we do as a species is to work that the mutation of work into its capitalist form is so socially and psychologically damaging. It is this process which Marx refers to as ‘alienation’, meaning that the items which people produce with their work are appropriated by the minority of people who own the means of production, i.e. the employers or in today’s terms the global corporations. Marx related this sense of alienation to our estrangement from nature. His conclusion was that the process of work and the creation of products that are bought and sold by others, destroys the individual sense of self and radically undermines her or his identity. 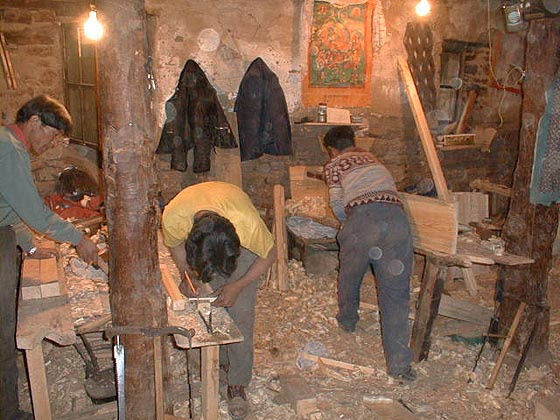 This loss of identity has been massively extended by the globalisation of the international economy. Think of the work of Adam Bede, the eponymous carpenter-hero of a novel by George Eliot. His work links him directly to the other members of his community. He makes an intricate kitchen cabinet for the employer of the woman he loves, in the hope that this will catch his beloved’s eye and win her heart. How distant this portrayal of identity and relationship in work is from the life of the person who tends the machine that turns the thing, that makes the pin, that joins the leg to the bed, that they sell on the industrial estate. S/he has no idea where the item will be sold or used, never mind by whom. And similarly, when we shop we have little idea where or by whom the items we buy were made. We lose our sense of connection and the producer loses her sense of identity.

In response to this loss of identity, and particularly for those who are too poor to adopt brand-based consumer identities, we see a rise in identity groups based on gender and ethnic identities. This unfortunate response to globalisation has long been predicted and yet appears to surprise and horrify the Establishment when it expresses itself in terms of large numbers of votes for politicians who base their appeal on the offer of an identity. In spite of radicals and environmentalists warnings of the imminent depletion of natural resources or the collapse of the financial system, it seems that the most dire threat to globalised capitalism is actually posed by the loss of identity created by the meaningless and exploitative systems of both production and consumption that it feeds off. Tweet
Posted by Molly at 09:31