How Green is Marks and Spencer's Valley?

Evidence that bitter humour is to 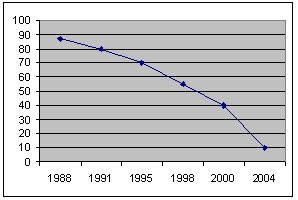 be found in a study of the global economy was presented again over the past few days, as an eco-plan announced by Marks and Spencer has been rapidly followed by Burberrys decision to close factories in the South Wales Valleys. Having held out for longer than most, Marks and Spencer finally abandoned its domestic sourcing policy in the 1990s. This, not the management expertise of Stuart Rose, explains the company's phoenix-like rise from the ashes. The graph shows the decline in UK sourcing, whose message is clear: abandon ethical sourcing and you too can make a profit in the global economy.
In the era of the brand the corporate myth is a significant contributor to financial success, hence the importance of the green image Marks is buying itself with its eco-plan. Unfortunately the small print shows that the carbon-neutrality so proudly pledged to journalists only extends to M&S's UK operations. Since it is production that uses the most energy, not to mention the need to transport products half-way around the world, moving your factories to China is an easy way to achieve carbon reductions. If you read the plan carefully you see that all the carbon commitments are about distribution in the UK; the commitments relating to the supply chain are all about fair trade.
So what of Burberrys? In spite of pleas from wealthy US consumers who want their coats made by Brits and not by the Chinese, the factories are to close and yet more Welsh workers will lose their livelihoods. They will be encouraged to find jobs in the 'knowledge' economy, by policy-makers who seem to ignore the obvious knowledge that, with Indians doing the thinking and Chinese doing the making, there is going to be nothing left for us to do except one form of gambling or another. A demoralising realisation, although one that does have its up-side in terms of the Kyoto targets.

There is an interesting myth abounding amongst journalists, economists and post-modernists (perhaps they were the people on the escape pod who repopulated the earth?) that we live in a post-industrial age. Nothing could be further from the truth. Industry is alive and well and belching out just as much pollution as ever it did, it's just that it has upped sticks and moved to China.
Another beautiful irony is provided by the fact that Burberry has recently become the iconic brand of the Chav, the post-industrial prole, who is defined as underclass by lack of social and cultural rather than financial capital. If you thought the English class system was dead a rapid glance at the Urban Dictionary online will quickly disabuse you of this. Our children are busy creating a more complex structure of class and style than was ever tolerated in the Thatcherite era.

With the closure of the Burberrys factory another group of workers who used to be able to find some sort of identity in their production will now be forced to resort to brand loyalty instead. At least the Burberry brand with its unattractive overtones will be an impossible one for them to adopt.
Tweet
Posted by Molly at 10:40