Who will love the children?

Today is St. Valentine's Day. Like so many other festivals it has been reduced by our commercial culture to a shopping opportunity. The message of love is easily lost in the pink ribbon and overpriced cards. I prefer to celebrate Dydd Gwyl Dewi, the festival of St. David, the national saint of Wales, which happens two weeks later. One of David's messages was to appreciate the little things in life, including our children. It is surely a signficant coincidence that this year's celebration of St. Valentine coincides with a report showing that British children are in a very unhappy state and that while they have plenty of money they are sadly short of love.

A few weeks ago separate academic research was produced that indicated that adolescents' Circadian rhythms are different from those of adults. Hence the reason they stay in bed until lunchtime and then roam the streets until the early hours is because this is what their bodies need to do. There has been no response in terms of adjusting teaching hours to suit when children are most able to learn. Instead children must force their bodies to fit in with artificial, unsuitable timetables. My daughter's school hours run from 8.45 to 3.05, so she is just waking up as school ends. Worse still, lunctime is before the last lesson, so at nearly 2pm, meaning she has no intake of calories for most of the day.

Given these pressures on growing, developing bodies it is no wonder that we see record levels of poor nutrition and mental ill healt 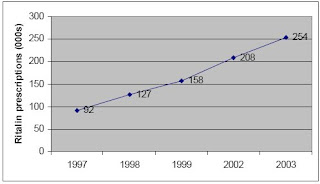 h amongst children. Unfortunately the drug companies see in this a marketing opportunity, selling Ritalin, a stimulant, to children whose signs of depression resulting from emotional neglect are masked. They are made manageable and their exam results improve while drug company profits are increased . Department of Health figures reproduced in the graph, plot the rise in Ritalin prescriptions from 92,000 in 1997 to 254,000 in 2002, a 326 per cent increase in just six years. The long-term emotional consequences of this abhorrent treatment are now becoming clear.
Feistier children respond to social oppression with resistance and aggression. They resort to vandalism, violence towards others, and self-harm. Record numbers of our children are now being labelled as mad, bad or sad, and chemically adjusted or incarcerated. So rather than loving our children as they need and deserve we are forced by market economics to go out to work and ignore them, while they are bombarded with advertising, drugged and criminalised.

The bottom place in the league table of children's welfare must be particularly galling for a government that has made such play of caring for children, from Blair posing with his exploited brood on the steps of number 10 to the poignant difficulties faced by Gordon Brown and his wife. Brown's commitment to raising children out of financial poverty may be genuine but he seems sadly misguided in his understanding of what children need. Perhaps his Calvinist past makes it impossible for him to grasp that more work, whether by their parents in the workplace or themselves in school, is destructive rather than positive for the general state of children's health.
Tweet
Posted by Molly at 09:16