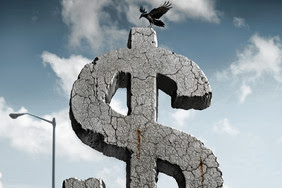 One of the techniques that economists use to control the global economy and corner its value is to create concepts that constrain our thinking about what is possible and how much change we may be able to achieve. Think about the way the word 'stagflation' was used to influence the politics of the 1970s. The economic hypothesis that it was impossible to have high unemployment and high inflation simultaneously was proved to be nonsense. Rather than admitting their theories were wrong economists simply created the concept of stagflation and blamed the power of labour for the 'failure' of the economy to grow.

It seems that following the success of their bullying concept of austerity economists have now moved on to the idea of 'secular stagnation' to explain or constrain what is happening in the global economy. See, for example, an article published in the FT by Larry Summers last month which includes the phrase 'the implication of these thoughts is that the presumption that normal economic and policy conditions will return at some point cannot be maintained.'

My interpretation of this article is that following the crisis of 2008 capitalism-as-usual can no longer be maintained. Capitalism is evolving into a new form and Summers is trying to influence the form the new economy will take. Of course the priority for global elites is to maintain a system that enables their excessive wealth and power to continue. Austerity has done this very effectively in the short term but in the longer term levels of discontent will rise and Summers appears to be proposing an alternative characterisation of future trajectory of our economy, for which he is using the phrase 'secular stagnation'.

I have to say that I agree with Summers that the rules of the game have changed: 30 years of politically unconstrained economic activity ruled by market forces have resulted in a vast build-up of debt and widespread ecological destruction, to say nothing of the huge and increasing levels of inequality. Debt appears to have been the only viable stimulus outside the USA which, because of the particular and illegitimate power of the dollar, can simply create enough money to keep the economy growing.

Japan was the first country to move beyond economic growth and is used by Summers as an example of secular stagnation in practice. The response in the Japanese case was Abenomics, a concept created by journalists to describe the policies of Japan's prime minister Shinzo Abe over the past year that have been focused on stimulating demand to end Japan's 'stagnant' decades. The policy menu has included dramatic increases in monetary stimulus at home, combined with attempts at competitive devaluation of the Yen to encourage exports. To address the lowering of domestic demand employers are encouraged to increase wage rates and workers are encouraged to stay in the labour-market longer; immigration by young productive workers is also encouraged.

Perhaps I should have pointed out earlier that to economists the word 'secular' has nothing to do with religion but means a trend that persists beyond the short and medium terms. So we might explain the phrase 'secular stagnation' by saying that economists have concluded that the lack of growth is now a defining characteristic of the global economy rather than a temporary phenomenon. This is perhaps the most pernicious implication of the phrase: its inherent suggestion that growth is good and that a stable economy is stagnating. It is typical of the frenetic, perhaps adolescent, character of capitalism that it must consider stability to be equivalent to stagnation.

Given my work with the Green House think-tank and our Post-Growth Project it is interesting and important to me to consider the political power of countering the phrase 'secular stagnation'. We are in the process of thinking through what the post-growth economy might imply in terms of political engagement, the funding of public services, and the manipulation or otherwise of consumer demand. But the most important first step we must all take is to challenge the hegemonic nature of growth amongst economic commentators, of which the concept of secular stagnation is merely the latest emanation. Summers' suggestion that 'stagnation might prove to be the new normal' is designed to be greeted with horror by orthodox economists; but the earth and her defenders would greet it with a sigh of relief.
.