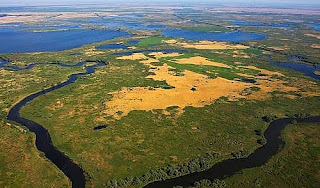 I went to see the second part of the documentary Wild Carpathia at the Romanian Embassy last night. It was a delightful event, although the audience were rather like characters out of a Forster novel waiting for the monsoon. Our patience was rewarded, however, by a lovingly crafted portrayal of a life in an unspoiled environment for which many of us are nostalgic but which still exists in the areas of Romania in the Carpathian mountains and the Danube delta.

I am interested in this idea of wild. It seems to refer to something out there, a way of life others preserve and that you/we can visit before returning (flying back) to our modern, electronically connected lives in complex, energy-intensive cities. And how wild is too wild? There are lynx, wolves and bears roaming free in the Carpathians, a source of delight to the film-makers. But how would we feel about our children playing in forests there?

Don't get me wrong: I am a sucker for the simple peasant life, and I particularly enjoyed the city of Sighisoara, where the historic towers were once used by the guilds to defend the city against invading Turks. Attempts are being made to revive the guilds and to keep their skills alive. This is all music to the ears of an economist like me who writes about a 'bioregional economy'. It was also interesting to note that it was the capitalist era that saw the most serious destruction of Romania's patrimony and that the communist regime protected the country's heritage and its natural beauty.

But I have a sneaking feeling that there is a level of inconsistency here: are the film-makers suggesting that we should idealise this lifestyle from afar, or is there a proposal wrapped up in the soft focus and ethnic music that we should attempt to re-create a land-based, self-reliant and simple life in England's green and pleasant land? While we are being invited to admire the peasants it is also suggested that our 'slow tourism' visits are essential to support their continued existence, which feels akin to philanthropy for the globalisation age and leads me to question why some of the world's citizens are granted the bounty to be able to patronise others.

To propose a future based around provisioning based on your local land is to risk ridicule and derision. Yet simultaneously many idealise exactly this kind of society outside their own backyard. While technological advances mean that the bioregional vision will represent a backward step, or a backward existence, it will still require a great deal more physical work and considerably reduced mobility. I would argue - and do argue - that quality of life would be massively enhanced, but how many would choose this as their daily reality rather than their annual escape?
. Tweet
Posted by Molly at 09:25