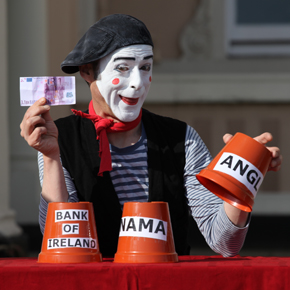 Campaigners from the Anglo: Not Our Debt camapaign were busy in Dublin this week, investigating a crime scene. They cordoned off the Central Bank in Dame Street and subjected it to forensic analysis on the CSI model. The white-collar criminals were not in evidence, but in the case of Ireland the fury at politicians is at least as fierce as the fury at banksters themselves. The Irish campaign is part of an international network of groups campaigning to challenge the imposition of austerity in response to illegitimate debts that were not entered into by democratic agreement. Such debts should be labelled as 'odious' and should not be allowed to destroy social bonds or public services.

The anger of the Irish campaigners relates to the failure of the government to use the criminal law to bring to justice those who have destroyed the Irish economy. They are encouraging the Irish people  'to submit complaints of suspicion of financial crimes in Anglo to the Gardaí, for example under Section 6(1) of the Criminal Justice (Theft and Fraud Offences) Act 2001.' Hence the creation of a crime scene in central Dublin yesterday.

Although the Anglo-Irish Bank no longer exists the Irish people are still paying for its reckless lending: repayments will amount to more than €47.9 billion by 2031, a full 30% of Ireland’s GDP. The campaigners are calling for the debts to be frozen. Their fury has been increased by the release last month of the so-called 'Anglo tapes', in which John Bowe, ex-head of capital markets at Anglo, can be heard laughing about the bailout that the bank has managed to extort from Irish taxpayers.

In a tape that would shame anybody outside the financial 'community' Bowe discusses his negotiations with Ireland's financial regulator as 'fun and games'. He asked for €7bn. in return for which they offered only paper guarantees and which he refers to as a bridging loan 'until we can pay you back. . . which is never', this last joke being a cause of considerable mirth on both sides. The phone call took place in October 2008, two days after Ireland pushed through a €440bn (£373bn) bank guarantee scheme that has nearly bankrupted the state. What the tapes make entirely clear is who is holding the power: the politicians have clearly capitulated to the interests of the bank's boldholders, explicitly so according to Bowe.

But these tapes underline the illegitimate nature of the debts and increase the potential for arguing a legal basis for them to be declared odious.Vicky Donnelly, of the Not Our Debt campaign said, 'The Anglo tapes show that the Anglo debts originated on the basis of deliberately misleading information. We question the timing of the release of the tapes and request that the full content of the tapes be publicly disclosed. We want to know who knew of the content of the tapes which, had they been made public earlier, would have led to massive public pressure to write off the Anglo promissory notes last February. This debt is illegitimate and should be written off now, once and for all.'
.