It was Treasury Management training day today and as chair of the Audit Committee I get to receive up-to-date financial analysis. Our excellent adviser explained how the Funding for Lending scheme is effectively a replacement for the failed quantitative easing programme. The banks were sucking up the QE money and using it to balance toxic assets they had written off, without increasing lending. The Funding for Lending scheme made £80bn available to them explicitly for lending. The data shows that again they have absorbed the money without much coming back to the real economy.

Treasury Management is really just a piece of jargon for how we invest the money that we need to hold in case of emergencies or to support monthly cash-flow. Of course my aim for our investments is that they should be removed from banks and sent in the direction of socially useful activity. We are a small council without the massive investments of our county, Gloucestershire, which invests in cigarettes while simultaneously being responsible for public health. Our money is mostly in financial investments, the final destination of which we know little about. I would rather follow the advice from Move Your Money and seek to use our money twice. 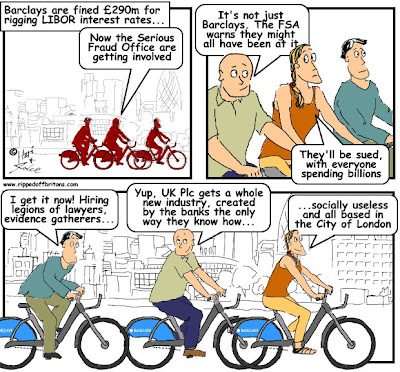 The problem with councils making such changes appears to stem from the phrase 'ethical investment' itself. Since national rules says that council investments must be based on the three criteria of yield, security and liquidity, many of the investments that we might like to see our councils placing their money in are bound to fail to pass the test of the council's financial officers, either because they do not have a sufficiently strong credit rating or because the yields are lower than those offered by banks and money market funds.

But a council is a political body and so can adopt a policy that designates that a certain proportion of its capital holdings should be placed with organisations that align with its political objectives, rather than being part of an investment portfolio. So if it seeks to support those who wish to purchase houses locally it can invest some money with a local building society, perhaps requesting that they establish a particular fund to be made available to first-time buyers within its postcode areas. Or it could choose to lend money to local social landlords to enable them to build more properties, which will be used as collateral for the loan. Security and yield and still important, but the do not dominate over the council's other objectives.


It is early days for our council to consider whether it can ensure that some of its money finds its way into local economic activity rather than the large international portfolios of the banks. Our next step is to prepare a motion for the Audit Committee to chew over the advantages and disadvantages of such a proposal. And we need to discuss these suggestions with finance officers. But it seems that at least part of the £20 million pounds that we have invested can be used for social good rather than all of it being invested in the same banks that created the financial crisis that has hit so many of our resident and deprived us of the money we need to deal with their problems.
.
Tweet
Posted by Molly at 15:30