US Set to Buy up the Pyramids 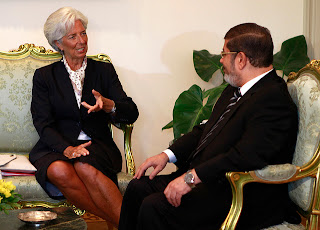 When Keynes wanted to come up with an example of activity that enables an economy to flourish by requiring the investment of huge amounts of physical labour but without causing the failure of aggregate demand he suggested the Egyptian pyramids. Today, however, Egypt is providing a different kind of lesson that I hope the Egyptian people learn in time: that democracy and indebtedness are not compatible.

Egypt is in the midst of negotiations with the US over the debt of its former regime. Such debt, which enriched Mubarak and his cronies, was one of the causes of the revolution and should now be reupdiated as odious and no longer the responsiblity of the citizens of the newly democratic Egypt. The presence of Christine Lagarde in Cairo offering 'loans' and 'partnership' suggest that this is unlikely to happen, and that Egypt will, like so many countries before it, lose its freedom to an entanglement of foreign debt. The process was begun as soon as Mubarak fell, as reported by Egyptian economist Noha el Shoki in March.

As Nick Dearden of the Jubilee Debt Campaign notes in a recent Guardian blog, the media reports of 'turmoil' in the Middle East are being used to cover the next round of resource theft that will follow the negotiation of dollar loans:

'This allows the US and European governments to portray the $4.8bn IMF loan under negotiation, the "assistance" funds that will shortly start flowing into public-private "partnerships" and free trade zones being planned by the EU, as "gifts" to the Egyptian people. . . . However, many people remain sceptical about the IMF's agenda – privatisation, indirect taxation, removal of subsidies (many of which are corrupt, but some of which do genuinely support the poor) and an economy based around exports. As one government insider said last week: "In Egypt, we call privatisation what it is – stealing." A propaganda campaign aims to convince Egyptians that "there is no alternative".'

The brave Egyptians who spent night after night in Tahrir Square demonstrating for their independence should realise that the battle was only half won. Physical freedom and political freedom mean nothing without financial freedom. Just as we are being subjected to the decimation of our public services to pay off banks and investors whose money was created from thin air, so all the wealth of Egypt will be lost to its people unless they resist the attempt by the IMF and the US to 'lend' it money to finance its development. Tweet
Posted by Molly at 16:49