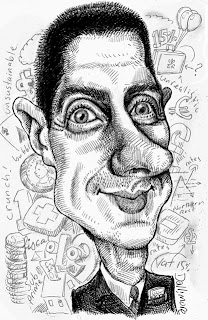 Robert Chote, who heads up the Office for Budget Responsibility, is the sort of economist on whom our futures rely. His career profile is unusual, in that he appears to have no practical working experience either in government, academia or industry, the closest being two years he spent as an 'adviser' at the IMF. He is a former journalist who then moved on to head up the Institute for Fiscal Studies, a leading thinktank analysing economic policy. For a man in such a powerful position the biographical detail available on him via the internet is rather thin,* but it seems safe to assume that he has spent his whole professional life on the theoretical rather than the practical side.

The Office for Budget Responsibility he heads was invented by the Tories following the election as a way of artificially distancing themselves from economic policy-making. Don't blame us if we make a wrong move, they enabled themselves to say, we are following the path scientifically determined by our independent economic advisors. The Office's reputation, and hence its power, relies on its ability to predict the course of the UK economy. This morning Chote admits, on behalf of his Office, that his predictions have been wrong. Growth forecasts will be revised downwards: the OBR was wrong about the impact of the government's policies on the UK economy.

In an interview in this morning's Independent Chote belittles the importance of the OBR's forecasts, commenting that 'You shouldn't bet the farm on any macro-economic forecasts being correct. We set out to make key judgments and to see how sensitive our judgements are, for example to how strong the recovery is or the pattern of growth.'

But this is just too glib: in reality, the OBR's forecasts have been used to back up Osborne's policies. Because the Office for Budget Responsibility predicted that the austerity programme would result in higher growth rates the Chancellor accepted this course of action on our behalf. Now it is apparent that in fact these policies are devastating our economy and stalling growth, are we to see a change of direction? Is Robert Chote about to lose his job? Will the OBR be abolished so that politicians have to demonstrate convictions and the courage to act on them, rather than indicating a phoney adherence to a bogus science?

This morning's interview makes clear how dangerous it is to leave our economic future in the hands of men like Chote who talk a good talk and cover the government's back. What we rather need in these times of crisis is politicians with the courage to take responsibility and to take action.

*The short biography at the end of the Independent article appears to be taken from his Wikipedia entry, which is shorter than mine.
. Tweet
Posted by Molly at 07:17