Christine Lagarde: Is She the Man for the Job? 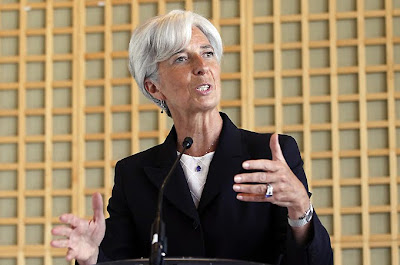 The extraordinary thing about Christine Lagarde is not that she is a woman, but that she is a lawyer. In spite of holding the second highest political office in France, and now the most important position in the global economy, she is not trained in economics and does not have any experience or training as a politician. This leads one to the inevitable question: how has Christine Lagarde reached this position of power?

Lagarde's appointment to the head of the world's bank was not an accountable or transparent process. There was no election, no selection process, no job description. Had there been, she would certainly not have been selected, since she is not qualified. But in the murky process by which the IMF is governed, political influence and having the right connections is far more important than understanding the problem.

The majority of Lagarde's career has been spent with the Chicago-based corporate law firm Baker & McKenzie. Presumably in a drive to undermine the French reputation for a protectionist approach to international economics and to bolster its globalist credentials, she was chosen as Trade Minister of France in 2005. By 2007 she was Minister for Economic Affairs. Her credentials have passed corporate scrutiny, but can she really be expected to carry authority without a proper understanding of how the economy functions?

As Jayati Ghosh questioned on the Guardian site,

'Would someone like Christine Lagarde be better? [than DSK] Unfortunately, she may even be worse, if her record as France's finance minister is any indication. The irony is that she would pursue, even more enthusiastically, the same self-defeating and economically damaging measures whose only beneficiaries are the German, French, Dutch and British banks.'

Just at the time when radical change is necessary, the world can only expect more of the same from Christine Lagarde.
Tweet
Posted by Molly at 11:07