Don't Get Caught on the Rebound

It is generally assumed that efficiency of resource use will lead to a lower level of environmental impact, most commonly in the case of energy efficiency which is suggested as a major policy response to the problem of climate change. However, this is an assumption that fails to take into account the human factor and the range of possible responses that people might make to higher efficiency levels. An example of an unexpected response is the ‘rebound effect’, which means that when energy efficiency is increased, the response may be to use more of the good or service that is now produced more efficiently. 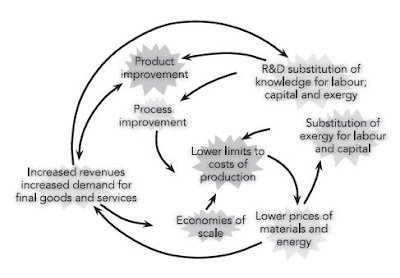 For example, is a home is better insulated, the people who live there may choose to enjoy warmer surroundings, rather than using their central heating less, thus some of the efficiency will not translate into energy savings. These rebound effects are illustrated in the figure, which shows the intricate relationship between product design, improvements in design processes, economic structure and social responses that are all involved in productive activity. Reducing the energy required to produce any particular good will lead to a fall in its price, which may then stimulate further demand, increasing the sales of that product.

This system of growth in the productive economy can be conceived as a reinforcing feedback cycle, with technological advance being one of the factors that drives economic growth (and hence resource and energy demand), rather than reducing demand and promoting conservation of energy and resources.

Rebound effects point to the difficulty of devising policies to tackle environmental problems. They also indicate that the major changes that need to occur as we move towards a lower-carbon economy will be in terms of a social and cultural paradigm shift rather than a technological change. So having citizens who appreciate the depth of the environmental crisis and are engaged in changing their lifestyle to contribute to its solution is more important than paying scientists to devise gadgets or even to redesign production systems.

You can find out much more about these effects in a useful book called Energy Efffiency and Sustainable Consumption. Tweet
Posted by Molly at 09:04