So what are we to make of the failure of the meeting that was billed as our last chance to save ourselves as a species? The conference was a demonstration of the gap between media spin and political substance in the modern world. Nothing demonstrated this better than the impotence of the man who many of the world's disempowered have viewed as somebody who could wield power to make a difference. From rhetorical bravura to rhetorical bravado, in one short speech Obama demonstrated that, like every other US President, he is utterly controlled by the economic actors who dominate his domestic politics.

The clue to what was going on was given by the separation, in the wake of Obama's arrival, of emissions reductions from the transfer of cash to larger but less diplomatically savvy countries that were once part of the patronisingly titled 'third world'. 'We haven't managed to agree on emissions', went the spin, 'but the other main issue has been resolved'. The creation of US dollars from thin air is not, and never was the purpose of Copenhagen. As followers of this blog will know, creating money in this way is actually driving economic growth and environmental destruction. Worse still, this deal does not offer the bulk of the money until after 2020, by which time it will be much too late to make the cuts necessary to ensure a habitable environment for humankind on planet earth.

The most galling aspect of the conference was to have to accept lectures from the US about leadership in climate change. As the table makes clear, Obama would do well to adopt a position of humility rather than the arrogance he showed at Copenhagen. The numbers make clear who the main culprits are in terms of CO2 per capita, the only just way of measuring emissions. These figures should be the real focus of our attention, and until every number in the second column of that table stands at 1 or less then we are in very deep trouble. 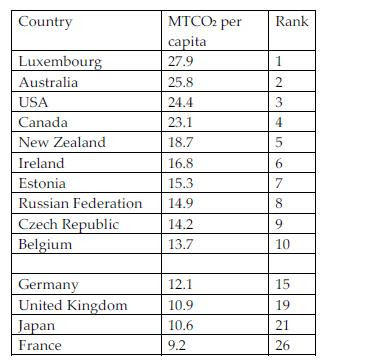 This gives a sense of the scale of reductions in carbon emissions we are talking about. Not giving more money to Brazil or South Africa, not cutting by 9% or 17% or 23%, but completely changing our lifestyle so that we end the 200 years of oil-fuelled over-consumption and return to a balanced relationship with the earth that is the source of all our wealth.

Obama's purpose in travelling to Copenhagen was to sidestep the main issue of actually reducing emissions and shift the debate to an area he could control, i.e. the production of worthless pieces of paper by the US mint, and an issue where he could take the moral high ground, i.e. the regime of inspection. He has also provided himself with a media opportunity that will give him some leverage in taking a bill of sorts through the Senate.

The EU and Japan, who have been acting with a moderate degree of commitment on this issue, have been left sidelined by a degenerate superpower and a group of wannabee nations who ought to know better. Leadership is still possible, although a negotiated settlement may not be. The way ahead is clear: an agreement between the developed nations who are prepared to make cuts and the poorer countries of the world. The contraction and convergence model can be made to work first in a club of nations, with transfers of technology to be exchanged for our excess emissions during our period of transition to a low-carbon economy. Tweet
Posted by Molly at 07:31