I am working hard not to go down the route of allowing my personal economic situation - as a university academic - to influence either my views or the content of this blog, but the system for tracking the value of the psychic and intellectual labour of the staff of the UK's universities can be used as an object lesson in the futility of accounting for work.

In the case of our universities, the strategy appears to be to turn creative intellectuals into contracted brains in the industrial vats. The level of animosity has reached such a pitch in the wake of Mandelson's Higher Ambitions report that a couple of weeks ago the country's professoriat - hardly the most radical sector of society - marched on Westminster en masse. Their march was to show opposition to the government objective of turning universities into training institutes for corporations.

According to the latest in a round of futile measurement exercises the Research Excellence Framework, the value of universities is to be measured partly in terms of their 'impact'. I am listing the list of impact measures in full at the end of this post since it gives a clear idea of how universities are being manipulated. I particularly enjoy the way that quality-of-life indicators are included as an afterthought - and we are expected to suggest ways to measure these for ourselves. The drafters of these proposals clearly lost confidence in their ability to translate quality into quantity when it came to life itself.

The order of priorities for universities is also made clear by these proposals. First comes subsidising corporate training budgets, then providing free inventions for industry, then helping out the public sector (activities which are defined in a pure managerialist way), then advancing sustainable development, increasing cultural richment, and finally helping society's losers and improving quality of life. This list encapsulates what is wrong with our whole social and political system, for which our universities are now intended to be an uncritical support system.

Part of the fun or working in a university is that you are permitted to spend some of your time devising typologies and taxonomies (I promise that other more useful things are done with the share of your taxes spent on HE as well). One such is the diagram illustrated below of Pasteur's Quadrant. It is intended to distinguish between the different sorts of research that 'scientists' carry out. 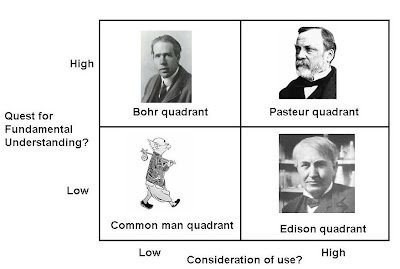 Obviously the two-by-two is a gross simplification and the graphic would work better if you thought of the two axes as continua, but there is probably some validity in considering how immediately useful in a practical sense research is intended to be, and to what extent the researcher was concerned to seek fundamental understanding as opposed to a more superficial explanation (or typology?).

The complaint of the Professors and other notables such as Sir Alec Jeffries, so-called inventor of DNA profiling is that it is impossible to know when research in the top left square, the blue-skies square, might generate practical outcomes. Jeffries claims that his own work was based on pure curiosity about the genetic make-up of seals. It was only as a by-product that his research team found that their insights could be used to map DNA found at crime scenes.

The purpose of the REF and other such impact-based measurement exercises is to force academics into the bottom right square. It seems to me that what they are actually doing is forcing academics to focus so hard on proving usefulness and avoiding deeper explanations that more and more are being forced into the bottom left square. This is the square of doom for any intellectual - the place where your work is not only shallow but useless as well. The sort of work that wins the annual Ignobel Prizes.

And in the latest assault on academic freedom researchers are to be 'tracked' according to a new process devised by accountants to require us to justify every minute of our time. In what Professor of Critical Accounting Rebecca Boden has called 'a deeply flawed and inoperable system', we are to keep note of how we spend the hours of our days, as though thinking could be subjected to a time-and-motion study. This will not only kill research driven by curiosity, as Jeffries feared, it will also undermine the place of thinking as a part of academic life. 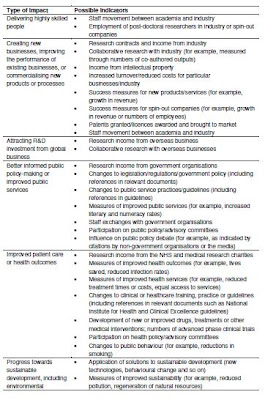 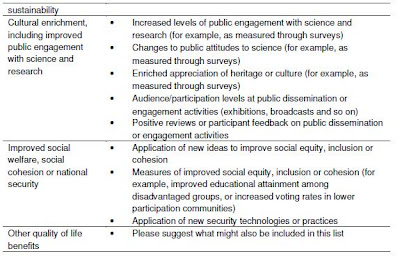