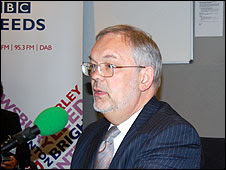 This is one of those moments - like when Tom Lehrer gave up satire to commemorate the award of the Nobel Peace Prize to Henry Kissinger - when you feel that all comedians should retire because the whole universe has been created by an almighty stand-up comedian. Not so much intelligent designer as cosmic joker.

Yes, the deputy-director of the bank of England is really called Mr. Bean and he really is undertaking a national tour to convince us of the seriousness of the policy of Quantitative Easing. The BBC managed to post an online story about this with every sign of a straight face:

'Mr Bean is in Leeds on the first leg of a tour of the UK, attempting to explain what the Bank calls its "conventional unconventional" measure to counter the recession. Armed with a box of explanatory pamphlets, optimistically entitled Quantitative Easing Explained, he is on a single-handed mission to the world of gilt yields, money velocity and commercial paper to the people.'

Excuse me - I am loving this so much I can't type straight for fits of hysterical laughing.

It is good enough that the bank have admitted that money was always created from thin air, that the whole time they have been creating money as debt - at huge cost to citizens and the planet - it was completely unncessary. That has given me great satisfaction. But that they leave the task of explaining this policy in the hands of Mr Bean is just a delight too far.

Indications are that the public are unconvinced - questioning why the money is not reaching the small businesses it was apparently created for. The explanation is simple: the vast majority of the thin-air money has been used to buy up national and corporate debt and not sent to small businesses that are strapped for ready cash.

According to the BBC, 'Mr Bean hopes to work out if the bank's policy of pumping billions into the economy is beginning to ease the severity of the recession.' It's just as well they only have Mr. Bean on the case. Anybody with a slightly straighter picture of reality would quickly grasp that this was never the intention. Bankers and corporations have seen their share of the cash; businesspeople and taxpayers will just be paying the tab. Tweet
Posted by Molly at 18:31