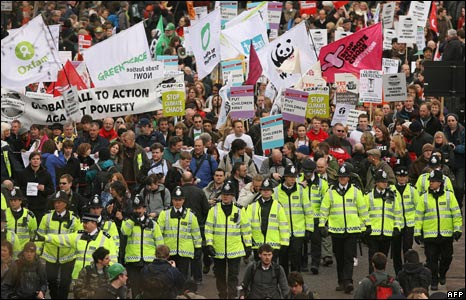 Yes, I know it's tempting to smash things up. I can't remember the last time I felt so frustrated as when I watched that glass window go at the RBS building and realised I could have been there if I hadn't been in an Economics and Accounting management meeting. Even the thought of being hemmed in by thousands of coppers without access to a toilet failed to persuade me I'd made the right decision to go to work today.

It is not difficult to say where the G20 should be going - the media are choosing to hear from the same old men with blue eyes and pale faces who caused the problem. The sense appears to be coming from people dressed up as apocalyptic horsemen and clowns. I am sorry to say that the Green Party has taken to wearing suits (and having a leader) in the mistaken belief that this will ensure we are given more serious attention by the media and political classes. If only it were so simple I might wear a suit myself.

But lest you despair, I will share with you the radical, visionary and just policy that was passed a fortnight ago at our still fully democratic party conference in Blackpool:

EC960 The present international financial system provides disproportionate benefits to banks, trans-national corporations and currency speculators. It must be replaced by a system in which money returns to its proper role as a medium of exchange, not a commodity in its own right. This requires international negotiation. The result could be a reformed World Bank and International Monetary Fund at the centre of a global economic system with commercial institutions playing a much diminished role.

EC962 All countries belonging to the tripartite system should make their currencies convertible but according to internationally negotiated and fixed exchange rates. Domestically countries would be expected to administer exchange controls.

EC963 The global trading system would aim to achieve balance trade between countries; those which operated extended surpluses or deficits would be fined.

EC965 Their role should be taken on by a neutral international currency ‐ the EBCU ‐ linked to the right to produce carbon dioxide. Tweet
Posted by Molly at 21:11