I had a rather unpleasant experience last week at the Welsh Economics Colloquium, a gathering of research-active economists in Wales. I was only able to attend for the final day but had quite forgotten how detached from the real world many economic researchers are.

In fact, economists in Wales are fairly empirical (for which read that they do take the workings of the world itself into account), but the keynote address was by a Manchester-based economist who spent an hour of our time outlining a mathematical theory about optimal currency areas without mentioning the present financial crisis at all and with barely any relationship to the euro. 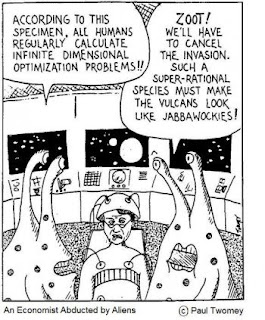 Having spent several years on the national steering group of the anti-euro campaign there were a wealth of questions I could have asked but the paper was so enclosed in its own theoretical bubble that there was simply no way in. This economist publishes in the highest-level journals, which only confirms my suspicion that they deliberately exclude any work that has any thing to do with reality because that reality proves the inapplicability of the theories of conventional economics.

As Mark Blaug put it: 'Modern economics is sick. Economics has increasingly become an intellectual game played for its own sake and not for its practical consequences for understanding the economic world. Economists have converted the subject into a sort of social mathematics in which analytical rigour is everything and practical relevance is nothing.'

The level of response to my own presentation - about the excellent potential of Wales as a green economy - was much lower than I would encounter in a political setting, or from those involved in the Transition Town movement. It barely rose above the level of guilt-tripping - 'Why do you live in Stroud and work in Cardiff?' being an example question. The arch-theoretician asked a question so abstract that my mind failed to comprehend it. I do remember that it began 'If you had been alive a million years ago, when the temperature was 10 degrees hotter than it is now . . .'

Over the years I have moved from claiming venehmently that I am not an economist, to feeling comfortable using the title 'green economist' to actually thinking that maybe I might be an economist. After this experience I feel sympathy with Hazel Henderson's revulsion from the economics profession. Too many economists are happy to draw large salaries, paid for by people shovelling chips in McDonalds, for creating work that has no value and no relevance. Tweet
Posted by Molly at 15:02