Who Pays the Piper? 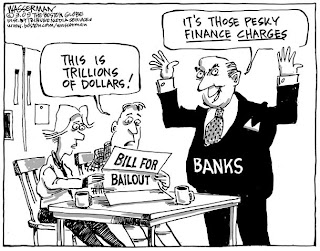 The public debate has moved seamlessly from outrage at the handing of vast sums of debt-based money to reckless financial institutions to wise words about the need to tighten our belts, pay more taxes and cut the public sector.

Even from a conventional economics perspective reducing government spending into the real economy in a Depression is a disaster. It is the normal pattern in recessionary times for the public sector to increase relative to the private sector; the fact that the government has already sent unimaginable sums in the direction of bankrupt banks does not alter this fact. The bailout was referred to as 'Keynsian' but in reality was nothing of the sort. Keynesian policies involve investment in public goods, not private losses.

Let's just consider again the size of the sums involved. The cost of the bailouts plus potential liabilities is around £617bn. This is the same amount of money as the whole of public spending last year. There is absolutely no way it can be recouped from tax increases or spending cuts. The arguments for them are rhetorical and political rather than prudent.

If we add together the size of the public debt and the cost of the bailouts we arrive at a figure of £1,527bn. The British GDP is only £1,473bn. RBS’s liabilities are £1,800bn. so if we add that to the public debt it rises to £3,327bn. which is more than double the size of our GDP. The only way out of this mess is to negotiate our way out of these debts on an international basis. Attempting to pay them back will lead to a decade of Depression and several lifetimes of wage slavery.

What can we do about these misguided and unjust policies? For those who can get there, demonstrations in London around the time of the G20 should be fun and should help to vent some frustration. More important is to refuse to go down the road of the inevitability of public spending cuts: challenge every person who argues the case to you. There simply is no reason why an asset bubble and a transfer of value to the rich should mean that the rest of us have to suffer a savage cut in the standard of our public services. Tweet
Posted by Molly at 17:17