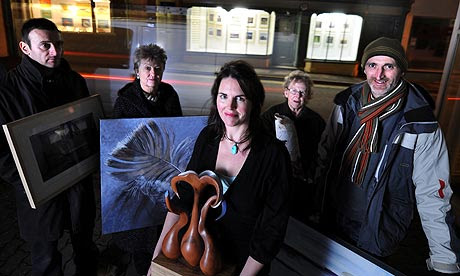 It was Lesley Greene, the Green Party councillor in our local well-heeled village of Bisley who first made explicit the importance of art in a low-carbon economy. 'Once the oil runs out', she intoned in her rather pukka way, 'there'll be bugger all else to do'. Now it seems that local artists in Stroud and Dursley have found a way of using the recession to their advantage.

As economic times get harder the property rights carefully honed by the marketeers will start to buckle and bend. I'm not talking bread riots, here, but questions about why property should stand empty when others have a desperate need for it will become sharper. In the end people will ignore the law and start taking over what they need for themselves, their family and their community.

This was the situation in Argentina following the economic collapse of 2001. Named 'la Toma' (the Take), it was a spate of spontaneous actions by workers, who moved backed into factories from which they had been made redundant and restarted them as worker co-operatives. Capitalism had broken down but they still needed work and people still needed the product of that work.

The artists in Dursley are bringing life, creativity and vitality to a row of shops in the town, and the Woolworths in nearby Stroud, a mecca for artists since the time of the Arts and Crafts movement, is likely to follow soon. To think of these one-time temples to consumerism being liberated is refreshing, but the issue of land requisition or squatting will be next on the agenda as the recession bites deeper. Tweet
Posted by Molly at 13:52