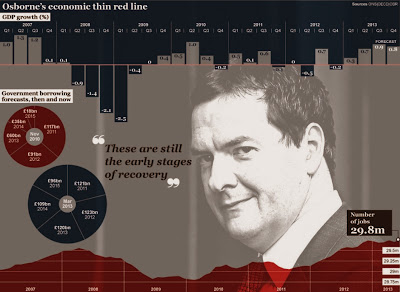 Aside from fallacious claims about reducing the national debt, the Conservatives' second claim to economic success--the creation of millions of private sector jobs--is also requires exploration. The well-rehearsed argument goes that massive cuts to public spending are not problematic since the private sector will take up the slack and create jobs to replace those lost in the public sector. There are several sleights of hand say that require unpicking in this part of the austerity narrative.

First it is important to note that the statistics tell us something about the quantity of jobs but nothing about the quality of those jobs, an argument made cogently by the TUC. A job as a nurse or an administrator in a public-sector setting is likely to be a unionised job with a nationally negotiated rate of pay and decent terms and conditions. The sort of job being generated in the private sector is much more likely to be an unskilled, poor-quality job with low pay. These jobs will do nothing to help with the standard-of-living crisis and will also not contribute to rebuilding a flourishing economy even in conventional terms.

The political narrative behind these arguments about the substitution of private for public jobs is the inability of the public sector to create wealth: an important part of the Conservative attack on the public sector (and devastatingly critiqued in an earlier blog!). So it is important to realise that many of the 'new' private sector jobs are actually simply redefined public-sector jobs. My job is a good example. Two years ago I worked in the public sector but now I work in the private sector. Because universities were privatised and are no longer funded from taxation, my job is now one that creates value whereas previously I was a parasite on the taxpayer. The same also applies to those who work in privatised sections of the health service or in services that are increasingly being outsourced from public sector employers such as schools and hospitals. (The Guardian has carried out some preliminary work unpicking this tissue of statistical manipulation.)

Finally, we need to ask what is a job? The data are most often used by Tories in claiming credit for this economic miracle are aggregated data based on everything that counts as a job. Incredibly even people working on zero-hours contracts are included in these figures as are those who are on any type of work scheme. So you don't actually have to be working to be counted in the government's jobs figures. Any government spokesman who presents data on increases in jobs without relating these two full-time equivalent jobs is, if not a liar, at least being very economical with the truth.
.
Tweet
Posted by Molly at 09:55