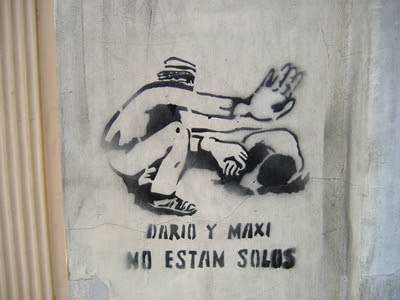 One of the best moments during my visit to Latin America came during a visit to a project celebrating the life of Dario Santillan. Following the economic disasters of shock-tactic neoliberalism under Menem he was one of the heroic young people known as piquiteros who both resisted and responded with hope and in solidarity. Dario was killed trying to protect his friend Maximiliano Kosteki who was under police fire, as shown in the famous image of him. As part of our exploration of the solidarity economy in Argentina we visited the Frente Popular Dario Santillan where Dario worked and where his comrades continue their emancipatory economic activity and keep his memory alive.

Th visited also produced for me one of the funniest moments of the trip. To raise funds the comrades sell t-shirts that they make on site. Finding the design but not in the colour I wanted I actually heard myself asking 'Can I have Capitalism Kills in the purple please?' I am now the proud possessor of said t-shirt. In the global consumer society my wish is their command, even in a ramshackle printworks in an Argentinian barrio.

One of the things that makes Latin American politics so fascinating to Western radicals is that the oppositions are so much more explicit than they are in the late capitalist countries where we have a system of Danegeld and consumption-based narcotics to undermine our dissent and soothe our sense of powerlessness. In Argentina and Brazil the economic injustice and the violent struggle between capital and labour is still visible.

But it was also in this continent that Catholic social teaching evolved into the idea of 'institutionalised violence', to describe a situation where the institutions of the state defend a situation of such inequality that it stunts and shortens human lives. In the statement from their conference in Medellin in 1968 the Latin American bishops defined institutionalised violence as existing:

'when, because of a structural deficiency of industry and agriculture, of national and international economy, of cultural and political life, "whole towns lack necessities, live in such dependence as hinders all initiative and responsibility as well as every possibility for cultural promotion and participation in social and political life," thus violating fundamental rights.'

Just as labour control through debt crisis and public-sector destruction through austerity began in Latin America and travelled across the Atlantic, including during the Menemismo that Darian fought to resist, so evidence of institutionalised violence is now emerging in Europe. Leading academics have found early evidence of the destructive health effects of cuts in government spending and the psychological and physical impacts of recession.

In Greece the incidence of HIV has doubled since 2011 and the country has also experienced its first malaria outbreak for many years. The book, called The Body Economic, concludes that austerity kills, although the body-count will never be laid at the door of the politicians and bankers responsible.
.