We Are All Greeks 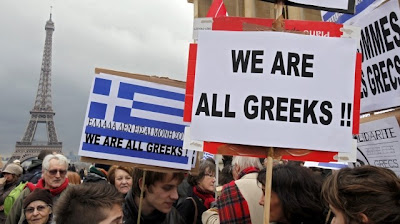 Over the weekend I was able to engage in some discussions about events in Greece. It is an increasingly desperate situation akin to similar situations in democratic countries put under pressure by finance capitalism. Political views are polarising between the extremes. Syriza, the coalition of left parties, is building towards a majority, but the fascists Golden Dawn are handing out bread and simple slogans - and they are also infiltrating the police. When people are hungry enough they may vote for a socialist party; whether that party is allowed to take control of the country is another matter.

Our comrades from Greece spoke movingly about how supported they felt by the use of the slogan 'We are all Greeks', that has been seen increasingly in recent months. It goes beyond the need for solidarity; it goes beyond the need to attack racism, however subtle; it goes to a deep understanding that the nature of capitalism as a system that requires co-operation if it is to serve human needs without leading to war. The rules of the global system need to be focused on balance and prosperity for all, rather than enabling the stronger, larger economies to profit at the expense of the rest.

This was the argument made by Keynes at Bretton Woods, in his desperate and failed bid to create a global financial and trade system that would not set us on the path to future wars. It is simple: in a system of exchange one country's success will inevitably lead to another country's failure and so rules have to be introduced to enable the weak to gain as well as the strong. Economic policy should be based on the principle of circulation rather than accumulation. While Germany refuses to recirculate its accumulated wealth in Greece it will not only damage the Greeks and increase tensions, but ultimately damage itself.

Keynes argued for the bancor, a neutral trading currency, and for countries to be fined for holding trade surpluses as well as trade deficits. What was agreed was the dollar as the trading currency and no rules to achieve trade balance. The euro was created to enable Europe to compete against the dollar, but it created its own imbalances which are the responsibility of the system designers, not the Greek people.
. Tweet
Posted by Molly at 08:26