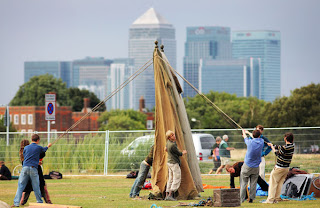 Climate camp was a delight. The whole event has been planned and executed with what I hardly dare call military precision, perhaps most of the all the 'swoosh' to the chosen site on Blackheath common, which was completely unexpected by local residents. Apart from the absence of uniforms, hierarchy, and meals-ready-to-eat, of course. Instead we had communally cooked organic veggie fare, available on time and for a nominal (and voluntary) charge. The level of organisation was immensely impressive.

Campers are encouraged to join 'neighbourhoods' which, with the exception of the Thames Valley (an in-joke at the expense of our friends in navy blue) are based around regions of the country. So we had our dinner in Wales and our lunch the following day in the Thames Valley. When our massive saucepan was empty, news reached us that there was still food in Yorkshire. It did begin to feel rather Medieval. Each neighbourhood meets at 10am to plan the day, share out work and raise any concerns about the camp as a whole. It then sends a representative to the spokes meeting so that the whole camp can share planning and decision-making.

I always find camps and festivals the most vibrant source of creative and informed discussion about the world's problems and solutions. The site was well chosen, with an excellent view of the skyscrapers of the city which could be seen beyond the perimeter fence draped with slogans such as 'the planet doesn't do bail-outs', 'soul not coal', and 'capitalism is crisis'.

My own contribution was the Friday night plenary on capitalism and climate change. It began with a camper explaining to a marquee packed with about 500 people, and in pictoral form, Marx's analysis of the crisis of capitalist production. The theory had been brought up do date by the inclusion of 'loadsamoney' and 'shitloads of cash' but otherwise would have been easily recognisable to the man with the beard. Aside from the proliferation of four-letter words, which I probably wouldn't get away with, I might follow this tack in my university teaching next year. As occupation of universities was the theme of one of the workshops over the weekend, I may not need to.

My journey home was chaotic and discordant in contrast to the smooth harmony of the camp. The Blackheath site passed its health-and-safety inspection. My First Great Western train would not have done since there was no water to wash your hands after using the toilet. Given a choice between 'business' and the campaigners I know who I would have running the country, and not just because of the standard of the WCs. Tweet
Posted by Molly at 09:00