No Sustainability Without Equity

Things have gone very quiet on the finance front. My general conclusion is: no news is bad news. We can only hope to read between the news and try to work up what is being stitched up behind closed doors. Mandelsohn's recent visit to Russia is a case in point.

When the Realpolitik begins we are in a fairly well-protected position relative to our sisters and brothers in the South. Because we sit at the high table of corporate capitalism, we can expect an acceptable deal. It will include a lifetime of servitude to pay off recently acquired mega-debts but is unlikely to include starvation and war - at least in the immediate future.

This unjust and inequitable settlement has severe implications for the planet. While the world's powerful nations ensure for themselves a share that is far more than those in the South, it is also far more than the planet can sustain. The figure illustrates the differences in the size of ecological footprints in different countries. It is the rich of the world who are trashing the planet.

The table below illustrates the same information in a different way, giving rates of consumption of various items by region of the world (from Jules Pretty's latest book The Earth Only Endures). Rather than trying to maintain over-consumption we should be lobbying our politicians to steer the country towards the 'prosperous way down' to a low-carbon convivial economy that is our only hope for survival as a species. 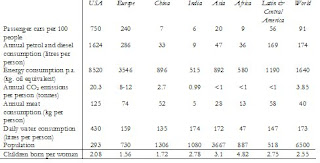