Currency for the Little Big Man

I've often been surprised by the many and varied radical economic initiatives coming out the USA which I have, in my Chauvanistic way, conceived of as the belly of the beast of global capitalism. Well, I suppose the latter is probably largely a correct view, and it is perhaps not surprising that those who live closest to the epicentre of the exploitation have been the most effective at resisting.


In his excellent book Money and Liberation, Pete North describes the struggle to maintain democratic control of the issue of currency in the post-Civil War US. Farmers organised against the 'tyranny of organised capital' and called for democratic paper money rather than the gold-backed money which allowed elites to dominate the economy. Their struggle culminated in the presidential race of William Jennings Bryan as Democratic candidate in 1896. He lost to McKinley, whose campaign had been supported by the plutocrats who reordered US capitalism and tied the dollar back to gold. 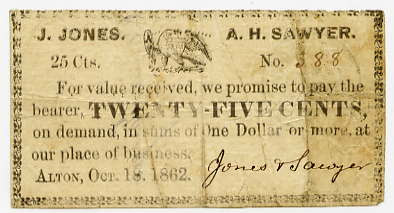 In the 1930s, following the collapse of this phase of capitalism, farmers in the South and West of the US again responded by producing their own currencies, known as 'scrip issue'. Nobel Prize-winning economist Irving Fisher supported this development, as did Upton Sinclair in California. His End Poverty in California movement promoted scrip issue as a means of exchange between co-operatives.

In the US today complementary currencies are more about ecological imperatives than poverty, but from Berkshares to Ithaca hours they are providing inspiration and underwriting alternatives livelihoods.

Given this history we should perhaps not be surprised that last week FBI agents raided the offices of the Liberty Dollar in Evansville, Indiana and confiscated the precious metals used to back this local currency. The activists who created it are reacting against the link between the dollar and global hegemony and war, as well as sharing the general loss of confidence in the dollar as reserve currency. Confidence in the dollar is falling globally and several of the nations who are bankrolling the US by buying government bonds could pull the plug on the whole US economy at the time of their choosing.

Aside from control there are sound financial reasons why bankers wish to keep control of the issue of the money we need to function in a complex economy. Conall Boyal has calculated that, if the Chancellor took the seignorage on money created by private banks there would be an extra £80bn. in the UK kitty. At present this money stays as bank profits. See more here: http://www.conallboyle.com/housing/SeigniorageBromsgroveoct07v2.ppt#22