I had the unpleasant experience yesterday of having to endure listening to a Tory being compassionate. This is always a nauseating experience. For those of us over 40 Peter Lilley must be best remembered for his appalling rendition of Gilbert and Sullivan at a Nuremberg-style Tory conference in the 1980s. A hate-list including single parents and the work-shy. No wonder his concern for the world's poor and his magnanimous offer to solve their problems through increased trade rings hollow.
The evidence to support his view that poor countries can grow rich through trading with rich countries is simply not there. The World Bank’s many papers showing improvements in absolute standards of living in developing countries are subject to question. There is a strong suspicion that the only way they can be shown to have grown richer is by a classic tactic of corrupt science: averaging. Based in the utilitarian paradigm which 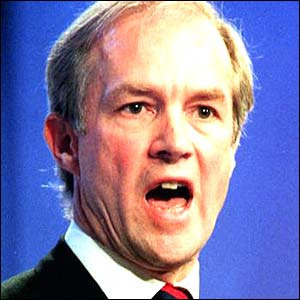 assesses the overall rather than the individual good, this tactic is clearly part of a capitalist worldview which privileges the needs and benefits of the elite over those of the mass. It is from this perspective that a national income measure that has increased and can then be divided equally between all the heads in the country—even when the wealth itself is clearly not—can indicate an improvement in the poverty situation facing that country.
This represents a tactical change for capitalist apologists on the issue of poverty, foremost among them the economists of the World Bank. It has proved necessary in the face of the striking evidence of starvation, destitution, and death. The claim is now that some in the poorer nations may have grown poorer while the country as a whole has improved its position. As well as the averaging problem this line also has the benefit of being conducted at the level of macroeconomic indicators, which are far easier to manipulate and obfuscate than starving children. So, the evidence that the gap between rich and poor is widening is irrefutable, although in some, but not all, of the countries following the IMF model the poor may be becoming better off in absolute, and usually monetary, terms.
Direct evidence of the impact of trade shows that this small and distorting increase in national income is bought at a high price. An UNCTAD report in 1997 showed that out of a sample of ten Latin American countries, in nine of them the differential in earnings between skilled and unskilled workers had increased as a result of opening up markets to international trade and that in most of the countries the real purchasing power of the least skilled workers had actually declined, in several cases by more than 20 per cent. International Labour Office data show that of 30 countries studied in Africa, Asia and Latin America, wages in two-thirds of them had fallen between the late 1970s and late 1980s, and the wages of the least skilled had fallen fastest.
In 1999 a paper from the World Bank reported on data for a sample of 38 countries between 1965 and 1992 to show that opening markets up to trade had reduced the incomes of the poorest 40 per cent of the population, while increasing those of the richer groups. The World Bank’s commentary was that ‘The costs of adjusting to greater openness are borne exclusively by the poor’. Mies and Shiva argue that the liberalization of markets is a deliberate policy to reduce subsistence and force the poor of the world into the capitalist labour-market, ‘The displacement of small farmers is a deliberate policy of GATT’. The policy has had a serious and negative impact on levels of hunger: ‘A conservative estimate of the impact of so-called liberalization on food consumption indicates that in India, by the year 2000, there will be 5.6 per cent more hungry people than would have been the case if free trade in agriculture was not introduced. Free trade will lead to a 26.2 per cent reduction in human consumption of agricultural products.’
Developing countries have spent these thirty years on the economic rollercoaster of international trade, because of the dogma from international bodies suggesting that this will end poverty, while at the same time the richest people in these societies have used this international game to increase their own wealth while the poor in the same societies have grown poorer. The overall gains from trade are minimal to the countries producing agricultural products: between 1986 and 1996 Ghana increased its exports of cocoa by nearly 80 per cent but only earned 2 per cent more in return.
Tweet
Posted by Molly at 16:16