Call for the Abolition of Wage Slavery

The conventional mindset loves to make clear distinctions, to paint the world in terms of black and white, to establish absolute dates when eras or cultures began and ended. As though the Neolithic, whatever 'new stone age' might mean, ended 5,347 years ago, in the middle of June, around teatime. Of course such chronological control does facilitate the celebration of historical landmarks, such as the era of slavery which is being greeted with much high-blown and self-righteous joy today.

The world does not in reality divide itself neatly between good and evil. Nor did slavery end in 1807. Even the formal historians point out that it was only the state-sanctioned market in human flesh that was abolished at that time. Slaves continued to be owned in the British Empire. But more than this, the consequences of the enclosure movement and the rapid development of an industrial system of production created what the man with the beard justly called 'wage slaves'. 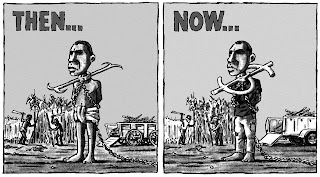 As we come to face difficult decisions about a truly post-industrial age, not one where we simply export our dirty work overseas, we can reckon that the industrial age has lasted about 200 years. The era of the ending of slavery coincided with the invention of machines that could turn fossil fuels into mechanical energy. Climate change has put an end to that stage of capitalist development so where do we go next?

My suggestion is that we start asking important questions about ownership. It is because those who control the economic system we are forced to live with demand an unfair and excessive share of resources that the pressure on the planet arises. Self-providing communities will have to learn to share resources and work fairly if we are to live in balance with nature and in harmony with each other.

I think this helps us to understand how the globalised trade system is inherently linked to the solution to climate change, as the Contraction and Convergence model links the two at a policy level. Because of the pressure to extract profits and rents for the wealthy, capitalism has been marked by schemes to avoid the natural limits of ecological and social reality. Fossils fuels and human flesh have both enabled the ungrounded and unbridled greed of the spoilt child that typifies capitalism.

To switch attention to wage slavery is not to belittle the suffering of the slaves of our own era. The suffering and exploitation of forced prostitutes and forced labourers in factories and fields persists in every country. We have used our organised political power to ensure for ourselves one step up the ladder so that our exploitation is restrained and decent. But while we work in a firm we do not own we can never be truly free. And while we leave the structure of the economic system unchallenged we can be sure that the morally offensive exploitation of people and the planet will continue.
Tweet
Posted by Molly at 08:37