Has Capitalism Been Overthrown? 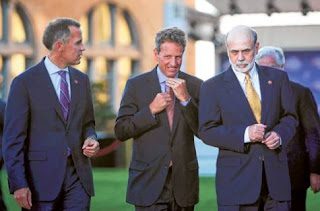 The general acclaim that greeted the announcement of Mark Carney as the new Governor of the Bank of England immediately roused my suspicions. Surely somebody could have raised a peep of disagreement with the fact that he is the greatest central banker the world has ever seen and second in credentials to only the Messiah himself? What could explain this universal fawning, I wondered, while I listened to the regaling of his impressive cv. My mind stumbled over one crucial fact: he has worked for Goldman Sachs. Carney has worked for the global financial corporation in Tokyo, New York and London.

I have told the sad tale of the takeover of the US Treasury Department by Goldman Sachs in an earlier post: a story that culminates in the move of Tim Geithner from Goldman to the Treasury. This safe pair of hands could cover the hole in my otherwise flawless theory: the fact that Ben Bernanke has not worked for Goldman Sachs. But on the upside Mario Draghi served his time there, before taking over the European Central Bank, serving as vice-chairman between 2002 and 2005. The revolving door between Goldman Sachs and the world's central banks is no secret, providing material for a Bloomberg blog last year. The implications of the fact that global finance is now running national monetary policies across the world receives little critical comment, however.

My own candidate for the job, Professor Richard Werner of Southampton University - the man who invented quantitative easing - was probably not surprised that his phone remained silent yesterday. After all, he has suggested that we allow the bank to produce enough cash to buy back our debts and end the Age of Austerity. Whose political interests would that serve? He is also unfashionably German. As when Sven-Göran Eriksson took over as England manager there were some quaint comments about Carney being the first 'foreign' governor, as though nation-states have any nostalgic import for these masters of money who only really identify with the offshore fantasy island labelled 'Cash' and resembling the Big Rock Candy Mountain for those who can gain access.

Perhaps I am just being naive here. Was there ever a time when capitalism meant a large number of small companies competing for investment capital as well as for customers? Was there ever a time when governments played a role for their citizens rather than being operatives of Central Bank Inc.? (Leo Panitch tells an interesting tale of the state-finance relationship.) In Marx's day the many-tentacled banking machines travelled under the name of Rothschild. Perhaps we should celebrate the democratic widening of the global economy demonstrated by the fact that the bankers governments are serving today are at least not all members of the same family.
. Tweet
Posted by Molly at 10:33