Making Good Use of the Things that we Find

This blog is called Gaian Economics to engender a sense of reverence for nature and recognition that all our resources - everything whose study falls within the remit of economics - comes initially from the Earth. Indigenous peoples tend to have this recognition at the heart of their culture and practice - a belief they sum up by using phrases like 'The Earth is Our Mother'.

I remember learning in school about the Inuit (we called them eskimos then, of course) and how they used every last part of the caribou: skins for blankets, hides for wigwams, sinew for thread, bones for needles. Not a scrap was wasted, we were told, and we marvelled at this. Such a contrast to the way we lived even then.

I spent this past weekend with my good friends Lydia and Robert, co-creators of Thrift Cottage, and had the usual restful and inspiring time. Robert's knowledge of the natural world - trees and woodworking are his speciality - is something he has learned from joiners and carpenters he has worked with who come from a different era. He is always full of wisdom about his craft that is humbling to somebody like me who lives from their brain. 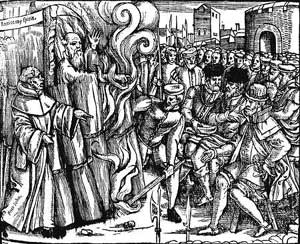 This weekend's gem was a short history of faggots and tallow. These two fundamental parts of the lives of our ancestors just a generation or two ago have slipped out of consciousness. The only picture I have ever seen of a faggot is on the woodcut from Foxe's Book of English Martyrs, but I was interested in converting garden and agricultural waste into fuel and so asked Robert how it is done.

His brother is the tallow man - he recreated by laborious practice the means of extracting this most useful substance from sheep's testicles (didn't I say everything had a use?) following instructions he found in a book from the 1960s. Boatbuilders and joiners are still using blocks of this natural lubricant. Robert says it is the best way of easing a screw into a piece of oak and the only lubricant that resists the tree's attempt to use its natural juices to keep it there. That puts high technology into its place. Tweet
Posted by Molly at 18:20 0 comments

What is the cost of a child?

My original intention was to write a post with this title in response to the news that Tony Blair has been given a lucrative half-a-million-a-year post at J. P. Morgan. Since this bank was implicated in the illegal reconstruction of Iraq, I hoped to find a figure for the number of Iraqi children who died to enable this colonialist wheeze and do the maths. Now who's thinking like an economist?

Economists actually work out the cost of children - and this is part of the problem. Even the most liberal newspapers encourage parents to see their children as 'costs', a recent estimate rising as high as £165,000. This reminds me of the work of economist Gary Becker, who discusses all family relationships as market trade-offs. I laughed at his foolishness; now I realise others were more gullible.

Children have become an important part of the consumer-based economy, with pester power now the subject of discussion in academic journals read by marketing gurus. Parents have been willing to take on debts to over-feed and over-equip their infants - and to assuage their guilt at not giving them enough of what they really want - time and love.

What has finally pushed me into posting on the subject of children is the appearance of Thatcher's feral children in the newspaper headlines. Can anybody really be surprised that the generation that grew up in the 1980s have emerged as bestial and amoral? Wasn't that the culture their generation inherited?

The era of Thatcher was dominated by the law of the jungle so why should we be surprised that it has spawned a generation of wild, untameable people? But this is being unfair to the jungle and its inhabitants. My memory of feral children from Romulus and Remus to Kipling's Kim is that they are noble savages; the stories stand as reminders that the natural world has its own balance and harmony.

Commentators identify the source of the problem as failed parenting whereas they should rather criticise the absence of parenting. In this late and decadent form of capitalism only those who sell their souls in the workplace are accorded value. Even people heroically bringing up children on their own are forced to abandon this most important role to spend hours on the telephone persuading others - perhaps other single parents like themselves - to take on debt to keep the economy afloat.

Many of the children who compete to attract the most ASBOS - a sign of distorted aspiration or an alternative pecking order? - would have probably preferred to be brought up by chimps or wolves since their own parents no doubt spent every waking hour at work on the consumption treadmill. Tweet
Posted by Molly at 10:44 1 comments

My railway station has been turned into a shopping centre

I spent the day in Birmingham today. In spite of its boast of having more canals than Venice, and laudable attempts to reconnect its present citizens with their more radical ancestors such as Thomas Attwood, it remains an unnattractive city, more dedicated to commerce and consumerism than culture.

For most of my visits I have been met by a friend and whisked off by car, or else have travelled by Birmingahm's excellent internal train system out of the urban sprawl around New Street. Today, however, I had to fight my way out of the station to the nearest bus stop. It seemed that this was not encouraged and, looking back, I realised why. New Street Station is these days only an afterthought, the troglodyte sidekick of The Pallisades shopping centre. Visitors are signposted away from the trains past the tempting shop-fronts, the palace of urban consumption.

I pondered on the word 'pallisades', which offers the tempting prospect of sofas and gowns fit for royalty but reminded me instead of coercive fencing, corralling unsuspectnig travellers into a compulsory shopping experience. The sense was reinforced by the Bull Ring shopping centre across the busy highway.

Resisting attempts to be branded I had refused coffee in any cup marked with a corporate logo, on the train as well as in the station, and was now determined to find a non-chain cafe. A piece of toast seemed out of the question, and I was equally reluctant to spend money on a 'six-inch torpedo' from Subway. Eventually, down an unappealing side street, I found the Little Tea Shop. My milky coffee was relabelled as a 'cappuccino' and the price inflated to £1.80 but it arrived in a china mug and I settled for that.

The Turkish owner hummed along to 'Dream a Little Dream of Me' and I thought about Mama Cass, whose terminal tragedy resulted from over-consumption but who none the less continues to comfort those of us finding it increasingly difficult to stomach the inhuman world of transactions between cattle, mediated through brands rather than relationships. Tweet
Posted by Molly at 19:54 0 comments

Some surprise has been expressed by the discovery that the wealth that has been generated by Chinese workers making goods to sell to wealthy Westerners has become concentrated in a few hands. Even in an avowedly communist country, 'development' has led inevitably to inequality.

Or perhaps the surprise is rather that the government in China is concerned about this and is devising policies to deal with it. Because, aside from economists who create an increasingly unconvincing litany of metaphors involving water trickling down or raising boats, the reality is that inequality is an inherent part of capitalism.

Without the inspiration of the super-rich and the fear of joining the lumpenproles why would any of us reluctantly climb back onto the treadmill of work - so especially grim at this time of year and following the extended break most of us took with such alacrity (including this blogger!).

Unfortunately, it would appear that the Chinese are under pressure from the UN to follow entirely the wrong route. The problem is being framed in terms of inequality between the urban and rural areas. Urban incomes are three times as high as rural incomes, leading to suggestions from economists that farmers should become more efficient and China should abandon its policy of self-sufficiency in food.

The comparative figures are, of course, utterly misleading. Like all output figures they only measure what is bought and sold and innumerated in cash. Rural peasants in China do not need much income because they mainly rely on self-provisioning and mutual aid. Just as peasants in our own country did until a hundred years ago or so. The benefit or marketisation will not accrue to them and is more likely to increase real inequality.

More on a couple of programmes from the BBC documenting growing inequality here. Tweet
Posted by Molly at 16:22 0 comments