Flying Down to Rio 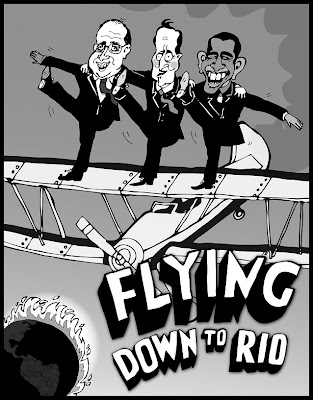 World leaders are gearing up for their trips to the global environmental conference in Rio later this month. With so much bad news around who could resist a little climate grand-standing? The suited heros will stride the world stage comparing the size of their green stimulus packages. Civil servants will spend hours preparing documents demonstrating reductions in CO2 emissions, despite the fact that a report soon to be launched by Green House thinktank includes clear evidence that, if you include aviation and freight emissions that are left out of the Kyoto totals, and especially if you include the emissions embodied in our imports, then we are polluting more and not less.

And what of the carbon impact of the conference itself? The admittedly rather primitive calculator provided by the website Flying Off to a Warmer Climate suggests that a business flight to Rio generates around 3,000 tonnes of carbon dioxide with a warming equivalent of around 10,000 tonnes. (The warming impact from aviation is higher because the emissions are produced high in the atmosphere.) This is more than two years' worth of an individual's total carbon emissions. And that is just Ed Davey. What about his civil service retinue? I can imagine a situation where, if these high-level negotiations were serious, this production of CO2 could be justified, but the kind of hot air that will be produced in Rio just does not deserve this level of planetary warming

It is a times like this that I wonder whether there is a God, but the constant stream of cosmic jokes and coincidences restores my faith. Not only does God exist, but she has a great sense of humour and wonderful timing. In 1933, some four years after capitalism's last world-wide catastrophe, and during a similar burst of cultural escapism, RKO made the film Flying Down to Rio. The film, which starred Ginger Rogers and Fred Astaire, included a range of crazy scenes with tiller girls high-kicking on the wings of planes that seemed so novel and glamrous in the thirties. This has provided the inspiration for the wonderful cartoon by Imogen Shaw that you are invited to share far and wide.
. Tweet
Posted by Molly at 09:08