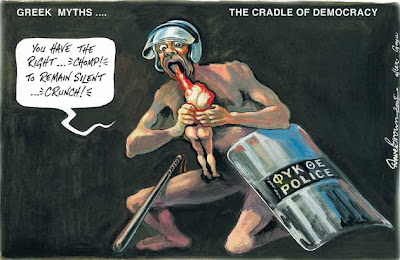 I was shocked to read such a blatant example example of casual racism in this week's Sunday Times, which I foolishly picked up out of interest while on a train. It made me realise the slide in standards of analysis and morality that the Murdoch ownership of the Times brand has provoked.

This assault on the good people of Greece by those with extended waistlines back-balances that contrast with their atrophied moral consciences reveals the worst aspects of the UK Establishment. The intention of such writing is that, once we have satisfied ourselves with stereotyping and insulting our Mediterranean brethren, we will apply our own shoulders to the wheel with renewed vigour lest, perish the thought, we might be confused with people who enjoy leisure time or seek to lead the best lives they can with the minimum of effort.

In the battle for hearts and minds that will ensue once the ballot boxes are put back into their locked cupboards we will witness the return of two of capitalisms most unsavoury cheerleaders: the Fat Controller and the Calvinist preacher. If Rod Liddle represents the former then Gordon Brown has always been haunted by the latter: the musty smell of the manse that hangs around him is the main reason that we have never taken him to our hearts.

How far distant we are from the Greeks remains to be tested over the coming months. Will we really buy the line that we should work harder to pay for the bankers' bonuses? Has the work ethic survived the years of debt-fuelled plenty? A common cause of grievance is that we have been deprived of a democratic opportunity to choose how the economic crisis should be tackled - as in Greece, whose politicians also sidestepped the issue in their legislative elections in October last year.

The lazy and dangerously divisive journalism from the Murdoch scandal-sheets should not divert us from the issue that is at stake: how the value in our economy is shared between working people and those who control capital. On a more personal level, I leave it to readers to decide who are really the pigs. Tweet
Posted by Molly at 11:14