Notable local permaculture gardener Helen Pitel has been teaching us all how to 'Name that Plant!'. Today we reached the noble yet humble rose. Through its history we can trace the evolution of our own culture--our movement away from and back towards Nature.
The dog-rose is native to Britain. It is the small rather unimpressive pink flower, with five petals and yellow stamens that we see in our hedgerows. It is the same plant that yields beautiful orange-red hips in the autumn. Each one has ten times the Vitamin C content of an orange, hence their importance in the Hedgerow Harvest campaign of World War II.
By crossing this native species with Damask roses from the Middle East and musk roses from the Himalayas a huge range of sweet-scented flowers were created. Their seasonal habit of flowering only during June was soon conquered once the China roses were discovered. These flowered right through to the autumn, extending the rose season.
But during the twentieth cen 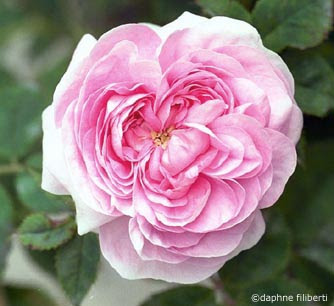 tury rose breeders strayed even further from Nature. By crossing tea roses from China with the existing crosses they achieved a mass of celebrity blooms. Many were named for human celebrities such as Elizabeth of Glamis (the Queen Mother), Princess Diana and Lilli Marlene. The hybrid tea is a rather obvious, in-your-face, sort of rose. It grows to a uniform height, has large bright flowers, but carries no scent, lacks reslience and is vulnerable to disease.
Helen drew our attention to the Peace cultivar, one of the most popular roses of the twentieth century. Ironically it was developed from stock sent from France to the USA during World War II, following the invasion of France by the Germans. You can see it growing around the war memorial in Nailsworth.
As the public's affection for the showy and artificial has declined, rose breeders are developing more natural, interesting and highly-scented blooms, known as English roses, which are also rich in oil. British monarchs have tradtionally been annointed with rose oil, but supplies had dwindled due to the popularity of the hybrid tea, and so the tradition had to be missed for this current Queen's coronation. Prince Charles is a keen rose gardener and is collecting the oil for his own coronation.
And just to prove that gardeners have a sense of humour, as well as a sense of cultural history, Helen told us a joke that gardeners have about the yellow rose the Lady Hillingdon rose--that she is no good in bed but great up against a wall.
Tweet
Posted by Molly at 15:00