The Lessons of the Market

So I've spent quite a few posts now dissecting and hacking off at the economist's bizarre and unrealistic model of the market, a market which is being forced into every area of our life but whose intellectual underpinning is a cardboard and stickyback plastic affair. This over-extension goes beyond even what economic theory would be happy with, since the whole theory of perfect competition specifically excludes certain categories of goods, which are defined as being mutually inconsistent with a competitive system of supply and distribution, namely public goods and goods which enjoy a natural monopoly.

Examples of public goods would be public services such as the police and flood defences, i.e. services which can be considered ‘non-rival’ (nobody else is providing them) and ‘non-excludable’ (if somebody pays for them we all benefit). Education and health are frequently excluded from this view of services and defined as ‘merit goods’, although my own view is that these are also public goods and have been redefined elsewhere for ideological reasons, i.e. to make them available for the rapacious market. Examples of natural monopoly goods would be the water supply or telecommunications, since the nature of the good makes it senseless to have more than one supplier because of the large-scale and inevitable nature of the economies of scale involved in establishing the provision of the good or service.

So we have arrived at a situation where, in spite of this the theoretical necessity assumption that markets can only be justified as offering economic superiority in the case of pure private goods, the global ‘free market’ is at this very moment seeking to extend its tentacles into every public good and service imaginable. If the supremacy of the market can only be demonstrated in the case of pure private goods, why were we forced to suffer the disaster of Railtrack and the chaos of GATS (the General Agreement on Trade in Services). Why is it that markets are being forced into areas, such as health care and education, where they are neither appropriate nor efficient, and on the basis of a market justification that they cannot even theoretically live up to? Of course in terms of economic theory we know this is a rhetorical question, because the answer lies in the realm of politics.

It is because of political pressure that the World Bank, which is a leading ideologue in the cause of markets when it comes to Structural Adjustment Programmes, is a leading player in the drive for the privatisation of the supply of water in the developing wo 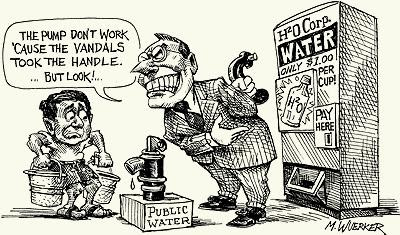 rld, water being almost the classic case of a purely public goodnatural monopoly. This is why water dominated the agenda at the Johannesburg Summit in 2002 and why 2003 was declared by the UN as the International Year of Fresh Water. Once the market was opened to profiteering suddenly there were plenty of companies prepared to provide water to the world’s poor. When the ideology has achieved its purpose it is the citizens of the world who have to live with the consequences.

It was inevitable that market economics would not be in the interests of consumers of water: even the theory said so. So did a report from the World Bank’s own research unit which questioned the efficiency of markets in the distribution of water and underlined the importance of firm state intervention. In the UK consumers have suffered from the monopolization of the natural monopoly of the water supply. The reality of privatised water in the UK is that none of the companies has really had to compete for their regional monopolies; rather they were given 25-year concessions when they were established in 1989.

Adam Smith, who is often touted as the originator of the theory of market competition, wrote about the invisible hand of the market. According to Smith, each participant in a competitive market is ‘led by an invisible hand to promote an end which was no part of his intention’. However true this may have been in Smith’s day, it has never been demonstrated in the complex, global economy of the 21st century, when the invisible hand has made itself visible, and for many it is making a gesture that Smith would never have expected. Tweet
Posted by Molly at 17:51