International Workers of the World

The question of immigration has been off limits for the left until fairly recently. The discomfort of left-wing intellectuals at being seen to be racist or unwelcoming has been skilfully manipulated by those whose interests have been well served by the influx of cheap powerless labour.  A worker without papers is a non-person, a person who has no legal rights who can do nothing to defend him or herself against exploitation. Globalisation has weakened the power of unions, as we have forced to compete with the slave-like conditions and wages of workers in China and the other ‘emerging’ economies across the world. The hard political-economy truth is that this process was greatly exacerbated by the desperate movement of illegal workers who travelled the world to chase the flow of goods and capital.


A few renegade intellectuals, notably David Goodhart and Maurice Glasman, have recently broken ranks, arguing that Britain’s white working-class have lost their means of livelihood as well as identity and that this is the root cause of our social malaise. Sadly, Goodhart in particular has failed to match his explanation of the impact of immigration with condemnation of the overtly racist policies of right-wing politicians who are seeking to capitalise on the unease this causes and so has lost much credibility. Glasman is by nature a contrarian and the clear division between his position and that of Labour’s traditional intellectual community has effectively led to the break-up of the ill-fated ‘blue labour’ project.

The target of Goodhart and Glasman were the middle-class intellectuals who adopt a liberal position on immigration without considering its impact on those in more vulnerable situations. Those with more liberal attitudes towards migration tend not to live in the neighbourhoods of our cities where they need to think about what the migration of such people does to the life chances of their children whether in terms of employment, housing or social services. Little surprise, then, that a recent survey of British social attitudes shows negativity to immigration to be closely allied with social class. The Gs might well agree that we are operating with outrageous double standards – exporting our language, companies, TV shows, media stars but objecting when those on the receiving end of this barrage choose to seek its origin personally. But the reality is that the migration of doctors and lecturers and engineers, who travel the world selling their skills, is a world apart from the migration of desperately poor economic and social migrants who sell their bodies and their souls. 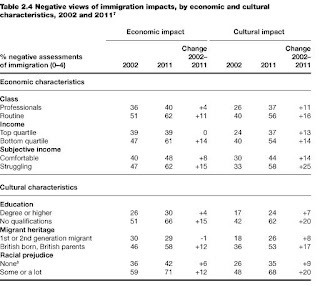 If you are beginning to feel a little hot under the collar at this point it is worth wondering whether we have all been duped by this discussion: is it not a classic case of divide and rule being exercised on the commentariat by the corporate elite? Because the question of immigration is not really a question of immigration at all. The political furore caused by the racist vans is just window[1] thrown by the political establishment. The present media and political bombardment creates a huge noise to attack or defend people from other nation-states who have become our neighbours. Such identity politics sucks you in and is a powerful distraction from the main issue, which is the consequences of the internationalisation of labour and the utter failure of those whose political project should be to protect the conditions of working people to make a political response.

Globalisation is a reality now, albeit a reality I would rather see reversed, for reasons that stem from my concern for the huge energy demand engendered by the movement of both people and goods. If it is here to stay then the rules governing the global capitalist system need to be negotiated by the people of the world: this should be where our energy is focused. Whether in terms of taxation or workers' rights the framework that governs the global market should be negotiated by democratic means and with social and ecological objectives. The failure of this most basic form of justice is why our lives appear more Dickensian every year. In a horrifying global echo, the national degradation that the first round of capitalism left in its wake, represented by the human flotsam of prostitution, drug abuse, gangsterism and cultural decay found in Victorian Britain, now characterises the cities of the world and is fast returning home. We are the International Workers of the World, and we have never been needed more.

[1] Wikipedia: a radar counter-measure in which aircraft or other targets spread a cloud of small, thin pieces of alumninium which either appears as a cluster of secondary targets on radar screens or swamps the screen with multiple returns
.
Tweet
Posted by Molly at 10:23