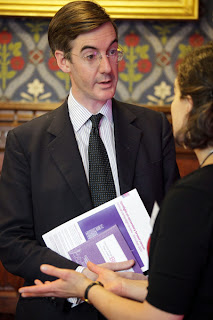 For a Green who came into the movement more because of social justice than environmental concerns it is heartening for me to see the opposition to equality and to environmental protection beginning to coalesce into one mass of odious opposition to a just and sustainable future. The specific example of this in recent days has been the active lobbying by Tory squires from the shires against the green levies on energy bills.

Nafeez Ahmed, who writes for the Guardian on matters of energy, has provided some excellent forensic analysis of the real interests that lie behind the faux concern for pensioner fuel poverty of parliamentarians like Jacob Rees-Mogg, MP for North Somerset. As well as being a prominent controversialist, Mogg is frequently to be heard issuing windy rhetoric about the dangers of environmentalism and the problems with renewables. In his world, coal is still king and the market should be allowed to reign supreme.

We might dismiss this as a lot of hot air were it not for the fact that the hot air is issued for a very specific purpose: to keep inflated the carbon bubble that many argue is more of a risk to our futures than the financial bubble that led to the 2007/8 financial crisis. The concern about the ‘carbon bubble’ is that the world has a vast overhang in terms of the value of fossil-fuel-related assets. As policies to tackle climate change are introduced this value will be suddenly undermined, leading to a collapse in energy commodity prices and the finance that is tied to them.


I have always found this a somewhat naïve argument: since it is the world’s richest and most powerful people who own the assets, fossil and financial, they are hardly likely to see the value of those assets eroded without a fight. Much more likely that they will launch a full-scale assault on the political consensus around pro-climate policies, which appears to be exactly what we are seeing in the antics of Mogg and his ilk. Their insidious attempts to undermine the scientifically evidence about the anthropogenic origin of climate change and the urgent need to address the issue flies in the face of the public interest but is very much in their own private interest.

‘Rees-Mogg is a founding partner at Somerset Capital Management (SCM), a global asset management fund where he currently works as a macro specialist while also being an MP. Among its many investments, SCM specialises in emerging markets, including in the energy industry. Its largest holdings include oil majors such as the China National Offshore Oil Corporation (CNOOC) - which for instance is spearheading multibillion dollar deals to access the North American shale gas market - and Russia's OJSC Rosneft Oil Company. ’

The wealthy who have unfortunately been elected to run our country hold their wealth in exactly the sort of assets whose value would be undermined if we were to introduce the sorts of policies that tackling climate change urgently demands. Even the small steps along the road to subsidising renewables, not to mention full-scale community ownership of generation on the Danish or German model, would seriously threaten their profitability. So while the Tories who attack green levies may speak of the poor pensioner in a cold house their real interests lie much closer to home.
.