Inside the World Trade System: Personal 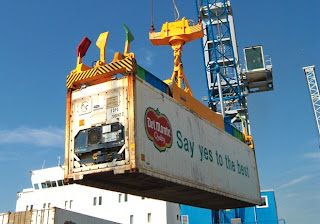 The idea of travelling on a cargo ship seems so far-fetched that the only way to deal with it was to make the plan work on paper and then go through with it without thinking too much about the personal implications. I had to leave myself entirely open to what might happen, since I had nothing to base my expectations on. Various jokes were made about the likely behaviour of the Filipino crew, jokes that turned out to be wildly inaccurate and probably racist too.

What I discovered on board was the international division of labour in shipping, or perhaps what we might more accurately call the ethnic segmentation of the marine labour market. On our ship the officers were East European and the crew were Filipino, with only a few exceptions. The senior crew had trained during the communist era, learning skills that would then enable them to drive the capitalist trade machine. They welcomed us into the small community and shared with us all their knowledge of the ways of the sea and the workings of their ship. We stood on the bridge watching the pilot guide us into and out of some of the world's large container ports. It was a remarkable experience.

Our best friend was the 'reefer man', largely because he had the best English of the officers. Every container ship needs a skilled mechanic and electrician to maintain the health of the 'reefers' that bring us our bananas. The word 'reefer' comes from the fact that these containers (the white ones you see on lorries) are refrigerated, having their own cooling system driven by electricity. Every day in the tropics Valentin, the reefer man on our ship, had to go down to what he called 'hell', the container hold, where temperatures rose to around 50 degrees, to check that the containers were functioning.

The days of joining the merchant marine to see the world are over. When the ships are in port the corporate owners are losing money, so the crew are busier than ever, working with the robots and automatic cranes to load and unload containers as quickly as possible. They rarely leave the ship while in port except to work on the quay; during my 14 days at sea I was the only person who left the port area. At sea the officers and crew work on regardless of conditions and had some horror stories to tell as soon as the waves reached above 4 metres. They were brave in this physical endurance, but also in the mental endurance of months spent in a tiny space far away from family and friends.

I know that my perspective on trade has been changed and that I will feel differently when I see a container on the road or see the imported fruit in the supermarket. We are the consumers of the world: we earn money in other ways to pay people from countries where wages are lower to do the heavy lifting to support our lifestyles. Every time you eat a banana or a melon you rely on that huge energy-intensive system where human lives are spent in sad and lonely work.
.