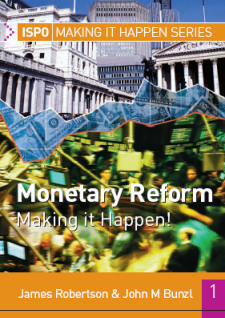 My post earlier this month reporting that Adair Turner, one of the front runners for the post of Governer of the Bank of England, has suggested that the financial assets the Bank bought in return for its quantitatively eased money should be simply cancelled felt fairly shocking at the time. Around the same time my attention was brought to a paper emanating from the IMF that has the even more surprising proposal that we should return to an effective 100% reserve on the creation of credit. In layman's terms this removes from banks the power to create money and reduces their role to re-lending money that has been deposited with them.

The paper is couched in terms of a re-examination of the proposal from Henry Simmons of Chicago University and later summarised by Irving Fisher in 1936 and is thus called The Chicago Plan Revisited. The report has two authors, a Czech economist named Jaromir Benes who works for the Reserve Bank of New Zealand and Michael Kumhof who is a staffer at the IMF. While the report states clearly that its findings do not represent the policy of the Fund it has been approved for publication.

The authors summarise the Chicago Plan as follows:

Fisher argued that such a policy would remove the ability of banks to introduce instability into the monetary system. More crucially in view of the highly damaging consequences of the massive public debts being carried by a number of developed economies, the Plan would allow for the elimination of these debts, since money would be created by public authorities rather than borrowed from banks with interest, which creates a corresponding debt, given that irredeemable government-issued money represents equity in the commonwealth rather than debt'. Fisher forecast a similar reduction in private debt.

The authors of this report test Fisher's theories using an econometric model. Their conclusions are striking: 'We find strong support for all four of Fisher’s claims, with the potential for much smoother business cycles, no possibility of bank runs, a large reduction of debt levels across the economy, and a replacement of that debt by debt-free government-issued money.' They suggest that banks would continue to exercise their role of allocating money between lenders and borrowers and providing high-street banking functions, but they would lose the role of creating money.

The authors write that 'We take it as self-evident that if these claims can be verified, the Chicago Plan would indeed represent a highly desirable policy'. Since their modelling suggests that the claims can be verified in terms of the current economic crisis we must await further policy moves from the IMF with interest, and the kind that doesn't bring debt crises in its wake.
. Tweet
Posted by Molly at 16:40