For a while now I have been blogging about the importance of a Citizens' Audit. The role of such an audit would be to settle the issue of how we acquired the debts that have left us so vulnerable that the Director of the government's Office for Budget Responsibility has apparently recent claimed that 'Britain is Bust'. At least as important, however, is to question how is the financial crisis and recession redistributing wealth?

The Bank of England  has recently addressed this question in a report on the distributional consequences of their policy of quantitative easing. This policy is often referred to as 'printing money', but in fact it is anything but. Printed money would have to be spent on real output, and hence would inevitably provide some stimulus to the real economy. QE, by contrast, has consisted of the creating of credit in the government's account at the Bank of England, with which it has bought government gilts, or IOUs. 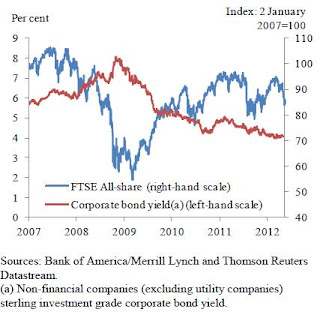 This has fed money into the financial economy and resulted in a boost for financial institutions and traded stocks. As the bank concludes: 'By pushing up a range of asset prices, asset purchases have boosted the value of households’ financial wealth held outside pension funds'. This is illustrated in the figure, where you can see clearly the fall in the value of stocks as a result of the credit crunch in 2008, which is reversed as the policy of quantitative easing starts to take effect from March 2009 onwards.

Had we not bought our own debt presumably we would look even more bust than Robert Chote thinks we do already. Hence the QE policy has reduced the cost of national borrowing, keeping the rates of interest charged by our foreign creditors low. The Bank has also kept its own base rate at a historic low of 0.5%, reducing the earnings of those who live from savings, especially the elderly.

What has most incensed the citizens of the UK is that the financiers who caused the financial crisis that has bankrupted the country as still profiting, whereas those who work or have saved are losing the value of their assets and their incomes. The Bank concedes this accepting that 'holdings are heavily skewed with the top 5% of households holding 40% of these assets', i.e. the assets that have increased in value as a result of QE.

These matters are the result of political and policy decisions and yet these decisions are not the subject of political debate. Instead of buying gilts, money could be created by government and used to fund green infrastructure, insulating the homes of the pensioners whose income is now so reduced that they cannot afford to pay their fuel bills, perhaps. The calls for a Citizens' Audit are precisely to enable us to have the information necessary to make these decisions as we should do in a democracy - together and in service of the interests of the majority rather than the wealthy minority.
. Tweet
Posted by Molly at 07:00