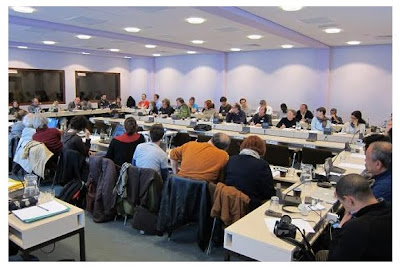 I spent my Easter weekend this year in an exciting meeting of social movements focused on rejecting the debt at source: on conducting a series of Citizens' Audits to ascertain exactly how we came to be in this disastrous position and to ask the question, Who really owes to whom? And why should the tiny percentage of the super-wealthy continue to extract such a vast share of the common wealth of nations? This is empowerment as an alternative to austerity.

In the room were around 60 activists from across Europe and the newly liberated countries of the Middle East. Countries represented included France, Egypt, Poland, Tunisia, Italy, Greece, Portugal, the UK, Ireland, Germany, Belgium, and Spain. In each country, popular movements have grown up to resist the disfiguring of societies that austerity brings, some with more technical approach to debt audit, some with more direct campaigning responses.

In Spain the campaign against the debt was launched in October 2011 under the rubric 'We don't owe; We won't pay'. A coalition of social and ecological movements, trade unions and political parties. Their objective is a general one: to raise the issue of the debt nationally and regionally and to challenge the perceived inevitability of austerity policies. This campaign is less focused on the specific technical aspects of debt audit, rather the campaign for an audit is used as a vehicle to demand a real democratic debate about the national debate and its social and political consequences. The aim of the campaign is to change the political model, taking power from the financiers and giving it back to the people. A special conference on the process of debt audit specifically will be held in Catalonia in October 2012.

In Greece the campaign against an unquestioning policy of austerity and in favour of a open discussion about policy alternatives forms an umbrella within which a number of groups operate including three who were represented in Brussels: Comite grec contre la d'être, No debt no euro, and the Greek Debt Audit Campaign. Specific investigation of the debt itself has been undertaken mainly by the third of these, and has consisted of research into single-issue examples of illegitimate debt. Overall the campaign is working at the level of popular education to share and explain the idea of debt audit and debt cancellation. The defining characteristic of the Greek crisis is a failure of trust elites and particularly where money is concerned. For this reason the Audit campaigners do not feel able to consult experts or to seek funding to pay economists or accountants to study the government accounts. In the current context they feel that this would only lead them to lose credibility in the eyes of the public. For this reason they undertake to forensically analysis the debt using the data they can gain access to, and in a voluntary capacity.

In Portugal the campaign against the debt was launched officially in a big public meeting on 17 December 2011. The focus is on working towards a full-scale public debt audit although, as we were told at the conference, 'All initiatives of resistance and a new social paradigm are unequivocally indispensable at this moment'. The aim of the campaign is to produce technically reliable results from a thorough analysis of government accounts. In the mean time, however, the campaign process itself is providing the opportunity for considerable public education. The common sense view in Portugal, as in many European democracies, is that the debt must be paid: that there is no alternative. The campaign has achieved widespread media coverage and is organising a roadshow to take its message around the country. One particular campaign is the launch of a legal action against accountants Ernst and Young, who have been found to be auditing companies they themselves work for in a way that may raised questions about the ability to provide independent audit.

From Egypt we heard from Noha el Shoki, of the Campagne populaire pour l'audit. A trained economists she told us of her campaign's goals to suspend payment of the foreign debts inherited from the Mubarak era and to enter into negotiations with debt holders. They have a rather dubious history of such 'rescheduling', such as the 40% downgrade in foreign debts that Mubarak was allowed in exchange for his support for the Iraq War. The campaign is undertaking a technical exercise to audit their country's national debt from this point. They are meeting with the new parliament's public accounts committee and are being well supported with information. Less encouragingly, Noha told us that during the period between the overthrow of Mubarak and the election of the parliament, Egypt was allowed to borrow at 8 times its previous annual rate, acquiring illegitimate loans that the new democracy will now be forced to pay back. These loans were agreed in documents that were not even translated into Arabic.

A similar situation arose in Tunisia, which will host the World Social Forum in April 2013. Fathi Aloui told us how the national debt is preventing the fledging democracy from succeeding. As in Egupt, during the interim between old and new regimes, Western countries massively increased their loans for questionable projects, tying Tunisia into future debt bondage. On 17 January 2011, three days after Ben Ali was ousted, the World Bank took control of the Tunisian Central Bank. The campaign is seeking to make these facts known to the Tunisian people: without economic democracy political democracy is worthless.

Ireland is, in some ways, the most inspiring example, since three academics from the University of Limerick have already completed and published an audit. The Audit drew some interesting conclusions about the relationship between the Irish state and financial speculators:

Once the state was guaranteeing returns, the market was open for profiteering and extortion, spiking in 2011 when returns were at their maximum. The academics also question the democratic acceptability of having secret bond-holders owning government debt.

In Britain we are still at the early stages of building a coalition to call for a Debt Audit. A technical exercise is useful, but if nobody notices its findings then it does not take you very far. Instead we need to build an ideological movement to reject the austerity vs. growth dichotomy and find a third way of trascending debts and moving towards a stable and sustainable economy.
. Tweet
Posted by Molly at 11:31