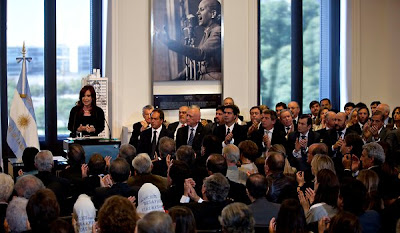 The business world is reacting with horror to news that Argentinian President Cristina Fernandez de Kirchner has made a decision to take control of her nation's oil resources, by taking a 51% controlling stake in the country's largest oil company YPF. As she reasonably argues, these resources belong to the people of Argentina, and she defies the right of Spanish oil corporation Repsol to profit from the patrimony of her country.

This is another positive challenge to the neoliberal world order which we too often take for granted. YPF was a state-controlled company for 70 years, before Argentina was forced to sell it in the 1990s in order to pay off its foreign debts. Reclaiming it seems a natural part of the progression of the Latin American countries towards a new economic model that is neither capitalism nor communism but something new. While the new model will accept markets operating for the social benefit, it claims the need to exercise political control over key sectors, of which energy is surely the most significant.

From the perpsective of a bioregional economy, the desire that resources should belong to land, and that the people who live in that land should claim ownership of them seems natural. How else can people act in a responsible way towards their local environment? How else can we have a sense of economic, social and political justice?

The Argentinian move comes on the same day that, in Britain, a report has been published that paves the way for a decision to allow private companies to create environmental mayhem by extracting shale gas in the process known as fracking. According to a colleague of mine who is involved in opposing the fracking operations in South Wales, the concession to exploit these resources in the whole South Wales area was sold for a mere £1m. by the central government.

While we should, of course, fight fracking because of its risk to public health, its ability to destabilise underground rock systems, the distraction from the need for rapid energy reductions, and the likelihood that the chemicals used in the high-pressure extraction process will contaminate ground-water supplies, we should also challenge the right of our government to sell the resources of our country to a private company which faces no public accountability. In a bioregional economy, we could expect to profit from the resources we own, but we would also have an incentive to act responsibly, since the consequences of the extraction would be felt by those who benefited from them. In the global economy, by contrast, local people pay the price whether in Latin America or South Wales, while the global elite reap the rewards.
. Tweet
Posted by Molly at 06:58