The demonstration I was on yesterday in Cardiff was so much fun it went on all night. If you are a tweeter you can support the protest by sending a message of support. The demonstration was lively, noisy and made up of a mixed bag of students and schoolkids, leavened with a mix of Marxists, socialist workers and Greens. We were already well into chanting when the younger students arrived in their own march to great cheers - what somebody on the Twitter feed has called 'the children's crusade'. 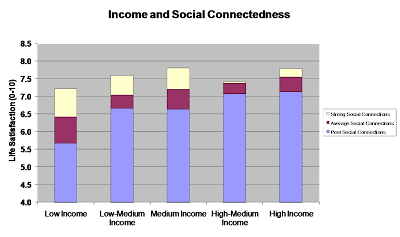 Protesting is turning out to be so much fun that it makes me wonder whether this is part of Cameron's reason for beginning to measure happiness since, as the graphic shows, close social connections make people happier than money, once their basic needs are met (thanks to nef for the graphic, and their leading research in this area). Labour's creation of the disturbingly oxymoronic position of Happiness Tsar has been taken up by the Condems who have instructed their national statistician to begin a programme of scientific measurement of how jolly we all are.

Unlike in Bhutan, however, happiness is not to become the focus of policy-making, merely an adjunct to the measure of economic growth which is, as the PM will tell us later today, the real source of all our aspirations. If Richard Douthwaite was right in his seminal book The Growth Illusion in establishing that, beyond a certain point, growth actually detracts from our happiness, then this is a circle that simply cannot be squared. Instead we need to be developing policies for the post-growth world, as in the recent example of participatory policy development at the Leeds Steady State Economy conference, whose report was recently published.
. Tweet
Posted by Molly at 07:17