A Tale of Two Sectors 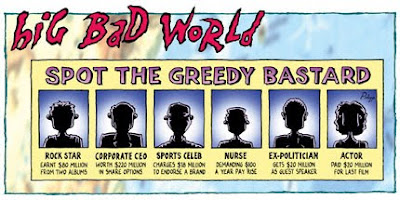 I am posting from distant Brno, which is a civilised country where you can travel miles on a tram for fifty pence and people still stop work to lunch together while resting and talking. So the gloom that surrounded the latest ´growth figures´ for the UK economy seemed less important than usual.

What are these guys measuring? You begin to think that they have been convinced by their own fantasy. The reason economists did not predict the continuation of the Recession may be that they genuinely believe that what is happening in the City has some relevance to the British economy. The confusion between counting artifically inflated monetary values and accounting for real economic activity seems to have impaired the ability of the statisticians to assess what is really happening.

The capacity of the private sector to "create wealth" has always been related to its ability to find various methods for creating money. The latest is to lean on the government to use money that has been queased into existence from nowhere to buy various bits of corporate debt, thus flooding the stock market with cash. Presumably this is some desperate stratagem to prevent the yachted classes from quitting the country.

According to the economistic mythology, those of us who work in the public sector do not create wealth. Education and health are not wealth, they are mere by-products and as nothing compared to a healthy balance-sheet. It may be this sort of prejudice that is stopping the government from using the money it is creating to invest in the future of our country by building up the public sector. This would be the normal policy in a time of Recession when private sector incomes are squeezed and public sector incomes make up what they lost during the boom times. This is illustrated in the graphic taken from an IFS paper by Richard Disney that looked at the public-private sector wage gap in the 1990s. 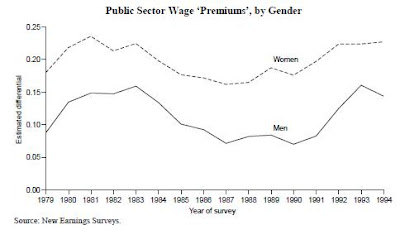 But this Recession is rewriting the rulebook. Private-sector managers are insisting that their bonuses continue, and these growing returns are being funded at the public expense. On the one hand we are being forced to forego the public investment we need to build a low-carbon infrastructure and improve health and education; on the other, we will be required to pay more in taxes to repay the debt incurred to keep the structure of inequality.

Perhaps most serious of all, the private-sector managers who have been injected wholesale into the public sector have brought their old ways with them. So they are responding to the recession by forcing cutbacks before they become necessary. This may partly explain the appalling recent figures, although most of these cuts are yet to bite. So we can expect to managerialised into an even deeper and longer recession ones the plans laid in the public sector this autumn come to fruition in the new year. Tweet
Posted by Molly at 08:00