I'm sure Gordon Brown was secretly delighted to have been compared with Flash Gordon at a recent press conference. Given his recent shady dealings with the bankster fraternity I would have thought Flash Harry was more appropriate. What would the flaming red Gordon of his student days have made of this man who is putting the poor of this country in debt to prop up a failing capitalist system? 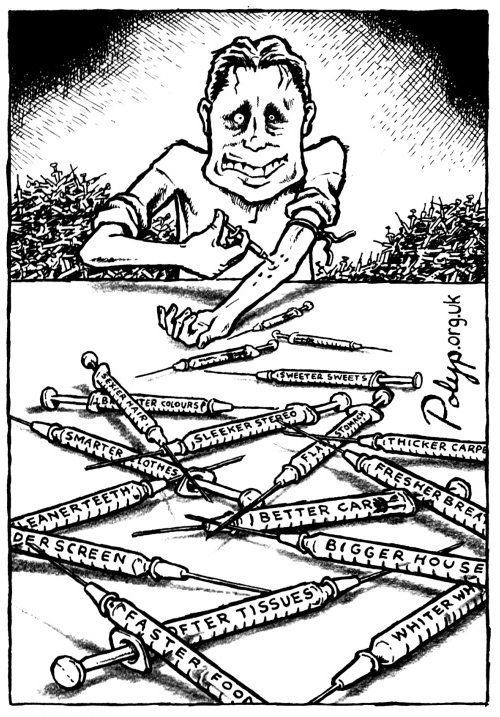 But is it the right thing to do, to fuel capitalism's addiction to money? Isn't Gordon rather acting as a drug dealer, providing more of just what is worst for the global economy, bloated with years of excess and destroying the body it depends on?

If you will indulge my extended metaphor for a while longer, perhaps we could explore what mechanisms we might pursue to tackle the addiction, to move the economy away from its moneylust and towards a balanced steady state. What would be the methadone that we could introduce as a substitute during the transition?

Gordon is calling for a summit to debate a new financial architecture. Part of that might be Richard Douthwaite's Ebcu or environment-backed currency unit. This is a neutral currency created by agreement between the world's nations and under their control. It could contribute to a global economy where the economic power of countries was more equal; in a world dominated by the dollar this can never be the case.

But more importantly, because the ebcu is linked to emissions of carbon dioxide, it operates like a carbon standard, linking economic activity to the ability of the planet to support that activity. It follows the Contraction and Convergence model for a decline in CO2 emissions and a fair sharing of these emissions between countries.

Although the 'summit' will be exactly that - our exalted leaders meeting like so many Old Testament prophets on the mountain top - we should make our demands clear. The agreement should be for a steady-state economy that balances the interests of the people of the world, and the planet we all depend on.

[Thanks to Polyp for another brilliant cartoon. Visit his website and check out his great new animated version of the rats in the trap] Tweet
Posted by Molly at 08:01