Growth or Balance? Cowboy or Spaceman?

The major objective of the economy as it works now is to grow, and the more it grows the happier the politicians are. Green economists would have more sympathy with the view of the radical US environmentalist Edward Abbey that ‘Growth for the sake of growth is the ideology of the cancer cell’. In the capitalist ideology it does not matter that economic growth is destructive and does not increase human well-being; it only matters that there is more money changing hands in the global market. There is too much emphasis on standard of living, usually measured in purely material terms, and not enough on quality of life.

For green economists growth is the major problem, not only because it is usually bought at the expense of the planet, but also because it is actually reducing our quality of life. The lifestyles we expect in the 21st century have caused the extinction of species on a massive scale, and by causing climate change are actually threatening our future as a species. Yet they have not even improved our lives. Richard Douthwaite makes this case forcefully in his book, The Growth Illusion. He gives many examples of ways in which economic growth has reduced our quality of life. Technology has reduced skill in work, lowered wage levels, and increased stress. Increased production has generated pollution and inequality, themselves the cause of physical and mental disease. Communities and personal relationships have been undermined by intensified patterns of work.

Other research has shown that econom 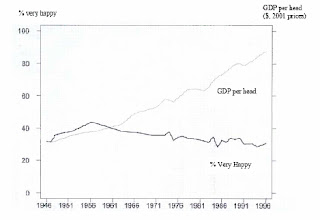 ic growth does not increase well-being or happiness, as illustrated in the figure in the case of the USA, which is the most advanced capitalist economy in the world with the highest levels of consumption, and yet the data shows that since the early 1960s rates of happiness have been falling, while rates of psychological illness have been increasing. The figure shows rates of happiness decline in the UK since 1946 as consumption levels rise inexorably (from a lecture by Richard Layard at the LSE).

This has been shown again by a study which measured increases in anxiety levels among American young adults and children between 1952 and 1993. Anxiety levels rose steadily during that time, to such an extent that the average level of a normal child today is the same as that which was found in children who had been sent for psychiatric treatment in the 1950s.

Green economics proposes a move away from a focus on economic growth and towards a ‘steady-state economy’, which is the only type of economy that can be sustainable in the long term. In the steady-state economy, the planetary frontier is respected and the earth is therefore the most scarce resource. This leads us to conclude that we should use it as wisely as possible, maximising its productivity while at the same time minimising our use of it. We should therefore focus more on quality and less on quantity.

In order to achieve the steady state we need to pay attention both to the number of people who are sharing the earth’s resources, and also their level of consumption. We should also be aware of the regenerative capacity of the planet, our only basic resource, so that non-renewable resources should not be removed at a rate faster than renewable substitutes can be developed, and our outputs of waste, including pollution, should be limited to the level where they do not exceed the planet’s carrying capacity.

The issue of resources is crucial. Economics is defined as the study of how resources are or should be distributed. Green economics suggests a whole change of perspective on our attitude to resource use, one that can be portrayed as a shift from the perspective of the cowboy to the perspective of the spaceman. The cowboy views his world as infinite and lives without a frontier in an environment where there are endless resources to meet his needs and a vast empty area to absorb his wastes. The attitude of the spaceman could not be more different. He is aware that his environment is very limited indeed. He only has available the resources that can be fitted into his small capsule, and he is only too familiar with his own wastes.

Green economists suggest that we need to leave behind the attitude of the cowboy and move towards that of the spaceman. Nowhere is this more necessary than in the world of business, where the gunslinger stills rules supreme but where viewing the earth as our only available spaceship would be a better guarantee of our survival as a species:

A businessman would not consider a firm to have solved its problem of production and to have achieved viability if he saw that it was rapidly consuming its capital. How, then, could we overlook this vital fact when it comes to that very big firm, the economy of Spaceship Earth and, in particular, the economies of its rich passengers? (Schumacher, 1973: 12). Tweet
Posted by Molly at 17:13