The Wind is Ours 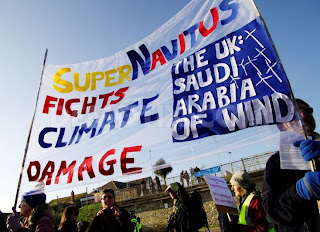 I was very pleased to be present at the August meeting of Stroud District Council's development control committee where we had an important item to discuss: planning permission for two wind turbines in the southern part of our district. The proposal came from the Resilience Centre, a renewable energy company based in the Forest of Dean. They had previously applied for planning permission for the turbines but permission had been rejected. This time, however, they had the support of the planning officers and were hopeful that permission would be granted.

As ever with such applications there was considerable local resistance from the community living close to the proposed site and the ward councillor for Hardwick also spoke against the application. Representatives from the Resilience Centre and from the community of Kingswood both spoke and the debate was well-informed, respectful and inclusive. Although the final vote will split it was in favour of permission being given and the key deciding factor was the fact that a large dividend will be paid to the community and local people will be offered the opportunity to buy shares in the wind turbines. So everybody in the community affected in Kingswood will benefit and in addition a local investment vehicle will be created.

On Saturday I saw plans for a much larger and more ambitious proposal to build a large array of wind turbines off the south coast of England close to Bournemouth and Poole known as Navitus Bay. In many ways this proposal could not be more different from that which had been agreed at the planning meeting. It has aroused huge local opposition much of which, like the opposition in Stroud, is apparently the result of the potential impact on the landscape. In the case of Bournemouth, this is interpreted as an economic objection rather than a social one, since the argument is that tourists will be put off by the 'towering' turbines.

However it seems to me that the real objection is much work closely connected with ownership than it is with the appearance of the windfarm. The Navitus Bay wind array is being proposed by a consortium between EDF energy's renewable subsidiary and the Dutch-owned Eneco Wind. This appears to be a bizarre reversal of our colonial past where we exploited the energy resources of other countries, originally of course those of Wales to fuel the industrial revolution that made Britain the economic driving force of global capitalism. But now, with a desperately unimaginative government and an economy focused on finance rather than the productive sectors, we seem incapable even of using our own energy resources in the national interest.

This is such a striking contrast with the situation in other EU countries, famously Denmark and Germany, where government is creating a framework for communities to emancipates themselves from energy corporations and have take genuine ownership over there in renewable energy resources.  Because of the focus on community and publicly owned renewables Denmark is the European leader in renewable generation and also consequently turbine manufacture.During the 1980s the Danish government funded 30% of all investments in wind turbines with the result that by 2009, 28% of Denmark’s electricity came from renewable sources.  While the economy has grown by 78% between 1980 and 2009 energy consumption has not increased, indicating significant advances in energy efficiency. 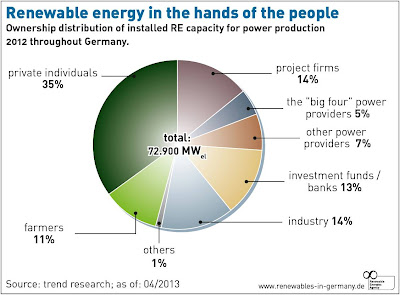 In the period of initial expansion some 80% of turbines were owned by families or co-operatives and 28% of Denmark’s energy coming from renewable energy. This has also led to impressive regeneration with the country now manufacturing half the world’s turbines, with the parallel creation of 20,000 jobs (all data from Andy Cumbers's excellent book Reclaiming Public Ownership. As document by the excellent Energiewende website, the transition away from fossil fuels and nuclear in Germany is even more impressive in its speed and again it is being driven by social ownership. The graphic shows that, in stark contrast to developments in Bournemouth, around half of German generating capacity is now owned by private individuals.

Germany is providing an inspiring example of the speed with which the transition to a renewable energy future is possible. These developments are in the possible because of the genuine engagement of local communities and their ability to take real rather than metaphorical ownership of their energy resources. What a sad contrast to the situation in the UK, with an emphasis on fracking and nuclear new-build to increase our dependence on yesterday's energy sources and to generate privatised profits for the few rather than energy liberation for the many.
.
Tweet
Posted by Molly at 08:22