Back in November when the glitzy (by banking standards) Mark Carney was appointed to head up the Bank of England to general acclaim my suspicions were immediately aroused. Although the discussion was all about the radical way he had managed the Bank of Canada the reality is that he is a banker's banker. By contrast several of those who were unsuccessful in the competition have recently proposed some challenging and interesting new measures.

Earlier in the week Paul Tucker, the considerably less glitzy current deputy-governer, floated the idea of introducing negative interest rates to discourage saving and get money out of the banks and into the real economy. The idea is that banks would be charged for holding balances at the Bank of England. If taken up this will be another painful policy as far as pensioners and those who live from savings income are concerned. Interestingly, it tallies with the policy of 'demurrage' suggested by Silvio Gesell in the 1930s and taken up in the design of several local currencies including the Chimegauer. Here, customers are charged for holding the currency, a design feature again intended to encourage circulation rather than hoarding. 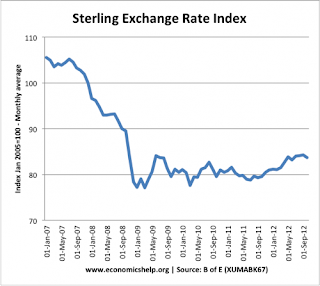 Alex Hern at the New Statesman suggests that this might be just an attempt to talk down the value of the pound and therefore be the next move in the currency competition between the world's leading economies. Given the implicit assault on the value of sterling that resulted from the AAA downgrade this seems unnecessary and unlikely, although the suggestion from Tucker that he is open to the idea of further QE, again effectively downgrading the value of UK debt and of sterling, adds weight to the case. The graphic indicates the value accorded to sterling by the markets since the early days of 2007 and makes clear how the currency has suffered as a result of the credit crunch, and relative to other currencies. 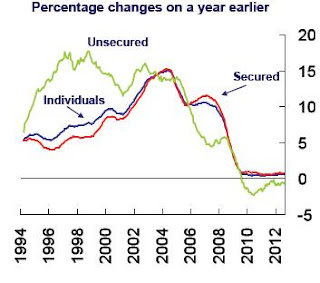 Meanwhile Adair Turner, the other leading candidate about whose glitziness or otherwise I refuse to comment, has been putting forward some interesting ideas to the Cass Business School. In a lengthy presentation including some fascinating slides,Turner makes clear that the monetary system is broken and that radical change is necessary. Perhaps the most disturbing slides is that illustrated here, using Bank of England data to plot the percentage change year-on-year in lending. Amongst other policy proposals, Turner considers the possibility of the ending of the fractional reserve system and the requirement of a 100% reserve.

Turner begins his presentation with the following quotation from Milton Friedman (1948):

'Under the proposal, government expenditures would be financed entirely by tax revenues or the creation of money, that is, the issue of non-interest bearing securities... The chief function of the

monetary authority [would be] the creation of money to meet government deficits and the retirement of money when the government has a surplus.'
He also demonstrates how the failure to resolve monetary policy in Japan was the primary cause of the lost decades of economic recession. This brings me to the preferred candidate for the post of bank governor: Richard Werner, whose experience of Japan and invention of the policy of quantitative easing him would have provided him with ample qualifications had it been a fair fight.
.